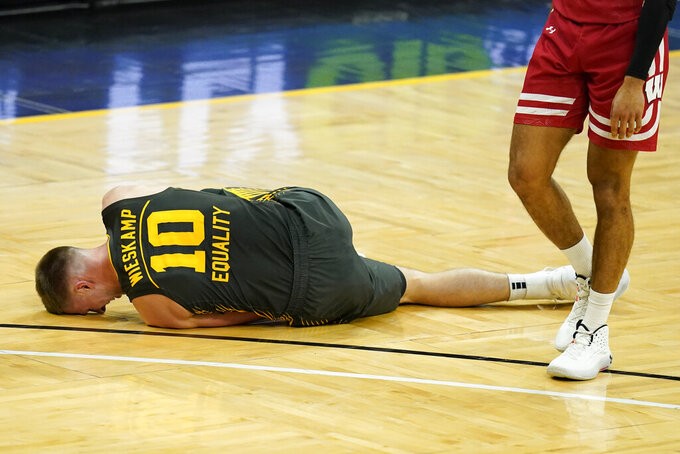 Iowa guard Joe Wieskamp rests on the court after getting injured during the first half of an NCAA college basketball game against Wisconsin, Sunday, March 7, 2021, in Iowa City, Iowa. (AP Photo/Charlie Neibergall)

IOWA CITY, Iowa (AP) — It was Senior Day, but Luka Garza didn’t know he was going to have to give a speech.

The Iowa center also didn’t know what else was coming in the postgame ceremony.

Minutes after the 6-foot-11 star scored 21 points and had 16 rebounds to lead the fifth-ranked Hawkeyes over No. 25 Wisconsin 77-73 Sunday, Iowa athletic director Gary Barta announced Garza’s jersey No. 55 would be retired after the season.

It’s why coach Fran McCaffery pulled Garza aside to tell him in advance about the announcement.

“He did not know that was going to happen,” McCaffery said. “And I knew Mr. Barta was going to ask him to speak. So I wanted him to kind of give him an opportunity to collect his thoughts.”

“Honestly, I didn’t expect it at all,” he said. “I didn’t realize it was a plan. Coach telling me that was a surreal feeling. That moment will be something I remember forever. Time slowed down. It was a real honor.”

Garza is Iowa’s all-time leading career scorer with 2,201 points. He leads the Big Ten in scoring this season and ranks third in the country.

This was Garza’s 12th double-double of the season and 33rd for his career.

“Incredibly heartwarming for me to watch what he’s accomplished,” McCaffery said.

Iowa (20-7, 14-6) has won seven of its last eight games, and will be the third seed in the Big Ten tournament next week in Indianapolis.

“It was important for us to get this win, to grind it out,” Garza said.

Jordan Bohannon’s three free throws with 34.3 seconds left gave Iowa a 74-71 lead. On Wisconsin’s next possession, Wisconsin’s Brad Davison and Iowa’s Keegan Murray got tangled up under the Badgers’ basket — Murray was called for a common foul and Davison a flagrant foul for a hook-and-hold after a replay review.

“It appears to have become the ‘Brad Davison rule,’” Gard said. “It’s become a joke.”

Murray and Davison each made their two free throws, then the Hawkeyes got the ball out of bounds. The Badgers forced a turnover on a held ball, but couldn't when Aleem Ford missed a 3-pointer.

Iowa’s CJ Fredrick made one of two free throws for the final margin.

Bohannon, a senior guard, had 16 points and added eight assists.

“Those two guys (Garza and Bohannon) were going to make sure we didn’t lose the game,” McCaffery said.

Iowa’s Joe Wieskamp shot 5 of 5 and had scored 12 points when he went down with a lower right leg injury with 8:16 left in the first half. He had to be helped off the court, and did not return. Wieskamp had scored in double figures in the nine previous games, averaging 16.8 points in that stretch.

McCaffery said he was unsure of the severity of Wieskamp’s injury.

“He looked like he was on his way to 40 (points) today,” McCaffery said.

Micah Potter led Wisconsin with 23 points. Davison had 14, and Jonathan Davis had 11.

The emotions were different for Garza.

Gard said a “spotlight” has been put on Davison, and called it unfair.

“He’s not a dirty player,” Potter said. “He does nothing maliciously. It’s not who he is.”

Gard said the rule has become a “weapon” against Davison.

Fans haven’t been allowed at Iowa home games this season other than family members of players and coaches. But before Sunday’s game, approximately 50 fans waited outside Carver-Hawkeye Arena to greet the Hawkeyes before they played their final home game of the season, holding up signs and applauding as players walked by.

Wisconsin: Big Ten tournament second round at Indianapolis on Thursday.