George scores 23 points for No. 5 Baylor over Norfolk State 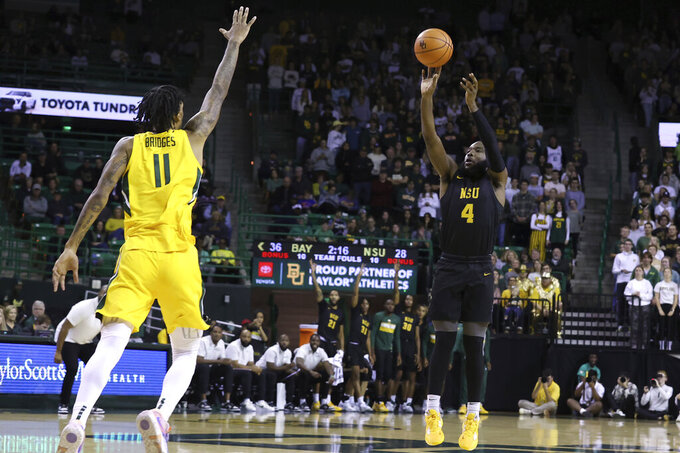 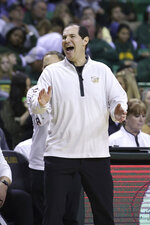 WACO, Texas (AP) — Baylor true freshman Keyonte George scored 23 points with six 3-pointers and had seven assists as the fifth-ranked Bears beat Norfolk State 87-70 on Friday night in a matchup of teams that played in the first round of last season's NCAA Tournament.

“My shot was falling, and I was doing every little thing I could do,” said George, who was 8-of-13 shooting overall. “Came out with the win, that’s the most important thing.”

“They did a good job getting him open looks," Baylor coach Scott Drew said of Bryant. "That’s a veteran team that knows who their scorer score is, but is patient enough to actually give him shots.”

Christian Ings added 15 points and Kris Bankston had 10 for the Spartans.

The Bears overwhelmed Norfolk State 85-49 in the first round of the NCAA Tournament last March in Fort Worth, about 100 miles from the Baylor campus. Baylor’s largest lead this time was 21 points.

“After playing them last year, we basically returned the whole team that we have, we kind of knew what to expect,” Spartans coach Robert Jones said. “I think last year might have been a shellshock a little bit, but this year was no shellshock at all.”

Norfolk State had its only lead at 7-6 when Bryant made two free throws just more than three minutes into the game. George then scored the first seven points in a 10-0 run for the Bears.

George had a 3-pointer and a four-point play in a 27-second span. He was fouled in front of the Spartans bench when making the second of those 3s, and made the free throw.

Baylor's biggest lead before halftime was 30-15 when George made a free throw after Ings was called for a flopping technical foul. A 3-pointer by Ings in the final minute cut Baylor's lead to 39-34, but Flagler answered with a 3.

After Flagler's 3 to end the first half, he hit another one to start Baylor's scoring in the second half. That ignited an 11-2 run that pushed the Bears ahead 53-36 with 16 1/2 minutes left. The Spartans never got closer than 12 points after that.

Norfolk St.: The Spartans have 12 players overall back from last season's team, and they have a loaded early schedule. They have three road games against top 10 teams in Noember. Baylor, No. 8 UCLA and third-ranked Houston.

Baylor: Drew, in his 20th season at Baylor, got his 399th win there. ... George and Bridges, a transfer from West Virginia, are among the newcomers on a team without several players who are no longer around eight months after that first-round NCAA game. Point guard James Akinjo was a graduate transfer last season, while one-and-done freshmen Kendall Brown and Jeremy Sochan were NBA draft picks. Matthew Mayer, who had a game-high 22 points in that NCAA game against Norfolk, transferred to Illinois.

Norfolk State faces its second consecutive top-10 team on the road when the Spartans play at No. 8 UCLA on Monday.

Baylor wraps up its season-opening three-game homestand against Northern Colorado on Monday.