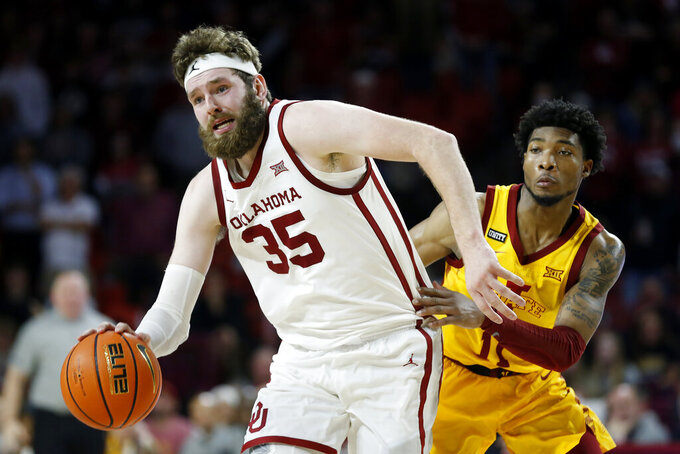 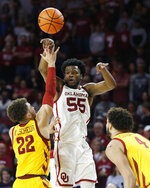 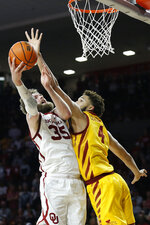 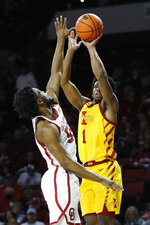 NORMAN, Okla. (AP) — Umoja Gibson scored 20 points, and Oklahoma rallied in the second half to defeat No. 11 Iowa State 79-66 on Saturday night.

It was Oklahoma’s third win over a ranked team this season under first-year coach Porter Moser. He said the performance was exceptional because Iowa State’s defense often creates havoc.

“I thought we took care of the ball, because I’ve watched Iowa State come back and creep into games because their press is elite,” he said. “I mean, they hit you up, and I thought we handled that really well the last two minutes.”

Oklahoma bounced back from a loss to No. 1 Baylor with a dynamic offensive performance, shooting 62% from the field overall and 82% in the second half.

“Whether it was fatigue, getting caught up in a road environment -- all those things probably contributed -- but we’ve got to be who we can be, and that’s a really effective and elite defensive team," Iowa State coach T.J. Otzelberger said. "And then we score from there. And I just thought today was the first time we weren’t that team this season, and we’ve got to bounce back.”

Jacob Groves banked in a 3-pointer to give the Sooners a 21-16 lead midway through the first half, but Iowa State took control until the break. Brockington scored 16 points on 7-for-8 shooting to help the Cyclones take a 36-32 lead at halftime.

Iowa State opened the second half on a 7-2 run, highlighted by a 3-pointer by Hunter, to take a 43-34 lead. Later in the half, Iowa State's Aljaz Kunc was called for a technical, and Gibson made the free throw to tie the score at 59.

Oklahoma finally took the lead on a basket by Jacob Groves on a dazzling pass by Bijan Cortes. A turnaround jumper by Cortes pushed Oklahoma's advantage to 65-61. Cortes then spun, left a Cyclone defender on the ground and scored a layup to put Oklahoma up by 10.

Cortes finished with five assists in 12 minutes in the second half.

“What he did was he got the ball moving side to side, he got it out of the trap," Moser said. "He got it moving. He went downhill and didn’t over-penetrate. He drew a crowd and then kicked it, drew a crowd, hit a cutter. He’s got such vision.”

Iowa State: The Cyclones depended too heavily on Brockington in the first half and Hunter in the second half for scoring. Defensively, they couldn't handle Oklahoma's passing, with Cortes picking apart Iowa State's defense late in the game.

Oklahoma: The Sooners have a great chance to move into the top 25. The Sooners were 27th in votes in the most recent poll.

Iowa State did not make a free throw and had its fewest attempts in a game — one — since 1981.

Otzelberger was careful when he addressed the issue.

“Look, we were getting to the rim," he said. “I felt like -- I don’t really say anything about the officiating, but I felt like it was physical on both ends and they ended up at the line more than we did. So whatever that was, I’m not sure. I’ll have to watch the film.”

Oklahoma was without Alston Mason, Akol Mawein and Rick Issanza due to COVID-19 health and safety protocols. Mason averages about 7 minutes per game, Issanza averages 4.6 minutes and Mawein averages 3.9.

Iowa State: At Kansas on Tuesday.

Oklahoma: At Texas on Tuesday,