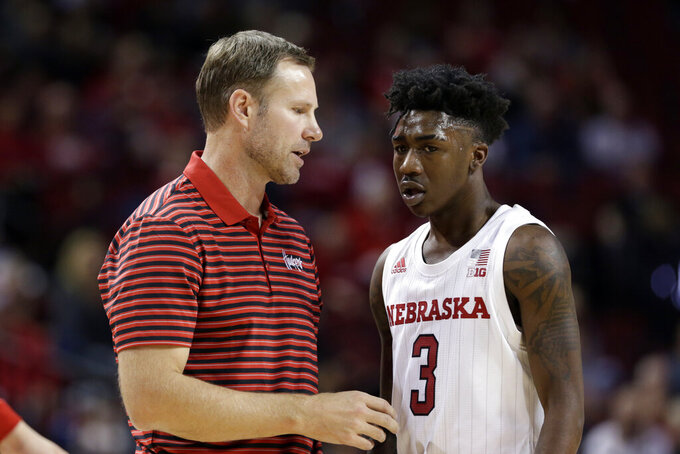 In this Wednesday, Oct. 30, 2019 photo, Nebraska coach Fred Hoiberg talks to Cam Mack (3) during an NCAA college basketball exhibition game against Doane University in Lincoln, Neb. Hoiberg knows the track record of Nebraska basketball coaches is not good. He wanted the job anyway. He takes over a program that has not won a conference championship in 70 years or ever won a game in the NCAA Tournament. He says a sold-out arena and top-notch facilities can trump the program's lack of tradition. (AP Photo/Nati Harnik) 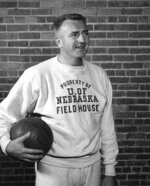 The curse of the Cornhuskers stretches back 70 years. That's how long it's been since they won their most recent conference championship. They own the distinction of being the only Power Five conference school to have never won a game in the NCAA Tournament. They're 0-7 all-time, and they've made one appearance in the last 20 years.

Hoiberg doesn't see a history of failure as much as he sees a future full of potential.

"I think Nebraska has everything it needs," Hoiberg said in an interview with The Associated Press. "The one thing they don't have is the tradition as far as winning in the NCAA Tournament. If I didn't think we could get there and build that, I wouldn't have taken this job. For us, it's about looking for the right players. Two things I think are very important when you're recruiting are great fan support and great facilities. I think we have as good as anybody in the country in those two areas."

Nebraska has ranked in the top 15 nationally in attendance each year since 15,000-seat Pinnacle Bank Arena opened in 2013. Season tickets for Hoiberg's first season were sold out in August. The Hendricks Training Complex opened in 2011 and has been used as a model for a number of NBA practice facilities.

"Tradition, sure it's important," Hoiberg said. "That's why Duke, Kansas and Kentucky have those recruiting classes they do every year. For us, it's the building and the crowd support. I think people want to be part of something that's never been done before."

Hoiberg, who signed a seven-year contract valued at $25 million, is using the same roster-building strategy he employed at Iowa State from 2010-15. He's brought in seven transfers — four, and possibly five, will be eligible this season — to go with four scholarship freshmen. Of the 16 players on the roster, 14 are newcomers.

The Huskers are expected to take their lumps. They're picked 13th in the 14-team Big Ten, the same place they finished in Tim Miles' final season.

The Nebraska job almost feels like a calling for the 47-year-old Hoiberg.

He was born in Lincoln in 1972. His mother and father received degrees from the university, and his father was a sociology professor there. His paternal grandfather also taught sociology at Nebraska. His maternal grandfather was Jerry Bush, the Huskers' basketball coach from 1955-63. Fred was 2 when his family moved to Ames, Iowa, so his father could take a position at Iowa State.

Fred quarterbacked the Ames High football team and was good enough that in 1990 then-Nebraska coach Tom Osborne called to gauge his interest in playing for the Huskers. Hoiberg, a lifelong Nebraska football fan, said he was honored to hear from Osborne. But basketball was always his game. He was Iowa's Mr. Basketball in 1991 and then became so popular playing for Johnny Orr at Iowa State that fans in Ames called him "The Mayor."

A 10-year NBA playing career ended when a heart defect was discovered during a life insurance exam. Hoiberg worked in the Minnesota Timberwolves' front office before ISU athletic director Jamie Pollard came calling. Hoiberg took the Cyclones to the NCAA Tournament four of his five years. He left for the Chicago Bulls, lasting three-plus seasons before getting fired last December.

Hoiberg spent a lot of time from January to March shuttling between Chicago and East Lansing, Michigan, where his son Jack is a walk-on guard and leader of the scout team for the top-ranked Spartans. Fred and coach Tom Izzo usually talked strategy and coaching philosophy when Fred was in town.

"I've enjoyed the chalk talks with Fred. Now he probably won't share those same things with me," Izzo said. "I enjoyed watching what he did at Iowa State. I thought he did an incredible job there, taking that program to what was starting to become an elite level."

Hoiberg speaks often about Bush, who never had a winning season in his nine years but was at the helm for one of the biggest wins in program history. In February 1958, Wilt Chamberlain and the fourth-ranked Kansas Jayhawks entered Nebraska Coliseum ranked No. 4, and the Huskers won 43-41 in what was called the biggest upset in the nation that season. Two weeks earlier, the Huskers had lost 102-46 to the Jayhawks.

The team moved from the Coliseum to the Devaney Sports Center in 1976. The Coliseum, now part of the campus recreation center, is a special place to Hoiberg.

The jocular Bush, who died when Fred was 4, was known as the "Big Bear of the Coliseum." Hoiberg said he wishes Bush could have seen him play, and he would have loved to have talked about coaching with him. He keeps a scrapbook with newspaper clippings from the Bush era on a table in his office, and he said he feels a connection.

"Every time I go to the Coliseum, I see his memorial and I get goosebumps walking in there," he said, "because I know the good times he had in that building."