Hubb scores 13 of his 15 in 2nd half, Notre Dame beats Miami 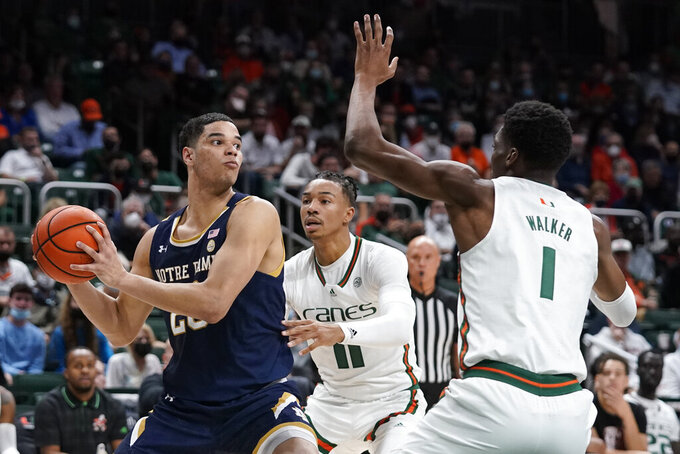 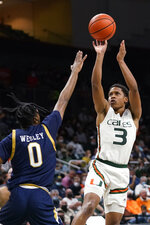 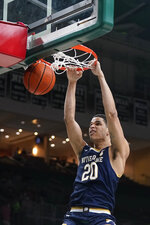 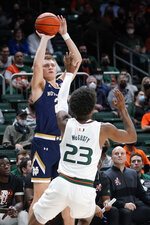 CORAL GABLES, Fla. (AP) — Paul Atkinson Jr. had a season-high 23 points with 11 rebounds, Prentiss Hubb scored 13 of his 15 points in the second half and Notre Dame beat Miami 68-64 on Wednesday night.

Notre Dame had two 10-0 runs in the opening 10 minutes of the second half to take control. The Fighting Irish made 10 of their first 16 shots after halftime, including 4 of 5 from distance.

Miami battled back, twice getting within four points in the final 30 seconds but couldn't get any closer.

Charlie Moore sank a long 3-pointer to pull the Hurricanes within 63-58, but Notre Dame dribbled down the clock and Dane Goodwin answered with a 3-pointer for an eight point lead with 1:41 left.

Moore stole a Notre Dame inbounds pass with 35.6 seconds left and raced for a fast-break layup to get within 66-62. Cormac Ryan was fouled at 23.1 and made both free throws for a six-point lead. Ryan played solid defense on Isaiah Wong at the other end, forcing a jump shot that was short.

Goodwin, who went scoreless in a 57-43 loss to Duke on Monday, made the first basket for Notre Dame (15-7, 8-3 ACC) and finished with 14 points. Freshman Blake Wesley was held to five points on 2-of-13 shooting but distributed seven assists.

Atkinson had a game-high 15 points in the first half on 7-of-8 shooting. Goodwin added 11 points as Notre Dame led 30-28 despite shooting 1 of 15 from 3-point range. Notre Dame made its second and third 3s on back-to-back possessions early in the second half for a 38-34 lead.

Notre Dame plays at North Carolina State on Saturday to close a stretch of four games in seven days. Miami plays at Virginia on Saturday.