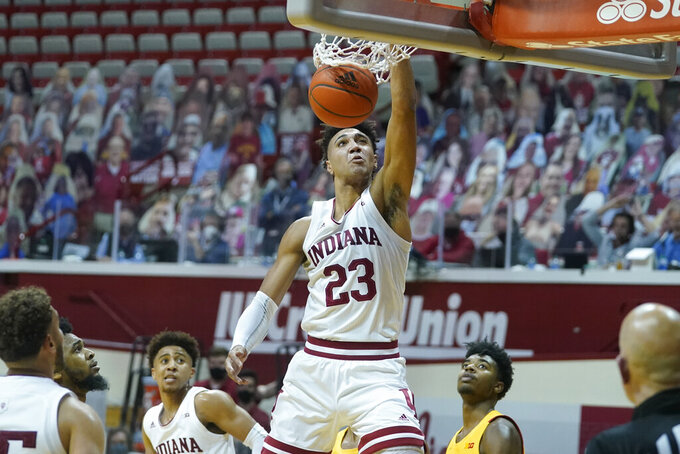 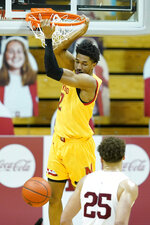 BLOOMINGTON, Ind. (AP) — Trayce Jackson-Davis took over the game midway through the second half, finishing with 22 points and 15 rebounds, leading Indiana to a 63-55 win over Maryland on Monday night.

Second-leading scorer Armaan Franklin (13.8) only played seven minutes before leaving with an injury.

Maryland led 27-21 at the half and a Wiggins 3-pointer less than five minutes into the second half had the Terps up 10, 37-27. Rob Phinisee hit a 3-pointer and Durham scored five points to quickly get Indiana back in the game.

The last lead for Maryland was 43-42 after two Wiggins free throws at 10:20. Jerome Hunter hit a 3 to put the Hoosiers up for good at 10:04 and then J ackson-Davis had a steal and breakaway dunk, starting a string where he scored 12 straight Indiana points for a 57-47 lead with less than two minutes to go.

Jackson-Davis made his last six shots while Maryland went scoreless for for a stretch of 6 minutes, 19 seconds, missing seven shots.

Wiggins hit a 3-pointer to start a 9-0 run that was ended by Jairus Hamilton's three-point play to give Maryland a 16-6 lead near the midway point of the first half. Thompson quickly answered with a three-point play and he combined with Jackson-Davis on all the Hoosier points in a 12-2 run that tied the game at 18 with 5:53 to go.

Wiggins hit a 3-pointer with a minute to go in the first half that gave Maryland the six-point lead at the break. The Terrapins shot 38.5% with four 3-pointers while the Hoosiers missed all nine shots behind the arc and shot 30%.

Maryland returns home to face No. 5 Iowa and Indiana goes to No. 8 Wisconsin on Thursday night.