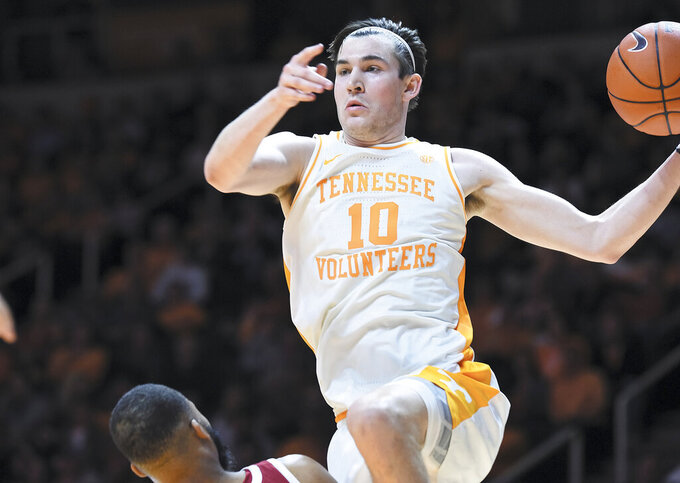 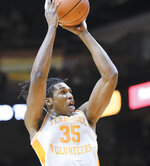 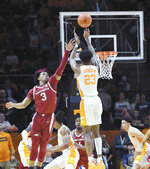 FAYETTEVILLE, Ark. (AP) — Mason Jones scored a game-high 37 points and Arkansas started the game on a 14-1 run and never trailed in an 86-69 win over Tennessee Wednesday night.

Jones, the SEC's leading scorer, scored nine of the 14 to start the game. He was joined in double figures by teammates Isaiah Joe and Desi Sills, who had 22 and 13 respectively.

Tennessee’s 10 first-half turnovers were its demise. The Razorbacks (18-10, 6-9 in SEC) scored 18 points in the opening 20 minutes off those Volunteers giveaways. In response, Tennessee (15-13, 7-8) countered with just three points off three Arkansas turnovers in the same span.

The Volunteers cut Arkansas’ 13-point halftime lead to two in the early part of the second, but Arkansas made six of its next seven from the field and built its lead back to double digits. Jones and Joe combined to score 39 of the Razorbacks’ 46 points in the final 20 minutes.

“Mason Jones was terrific. We had no answer for him,” Tennessee coach Rick Barnes said. He was feeling it, obviously. It’s as good a performance as we’ve seen all year against us.”

Jones eclipsed the 30-point threshold for the seventh time this season. The mark is the most for an Arkansas player in a single season since Martin Terry did it 10 times in the 1972-73 season.

Arkansas’ seven turnovers tied for the fewest it has had this year. On the other end, the Razorbacks forced Tennessee into 12 giveaways — just two in the second half — but scored 24 points off them and outscored the Volunteers 14-0 on the fast break.

Tennessee has now lost back-to-back games for the first time in almost a month and sits in the middle of the SEC standings.

Arkansas continued its NCAA Tournament revival with its second consecutive win after five straight losses while Joe, a projected NBA Draft pick, was out with a knee injury. The Razorbacks have won both since his return.

The Volunteers host Florida on Saturday afternoon in Knoxville.

Arkansas will travel to Georgia to play the Bulldogs on Saturday night.