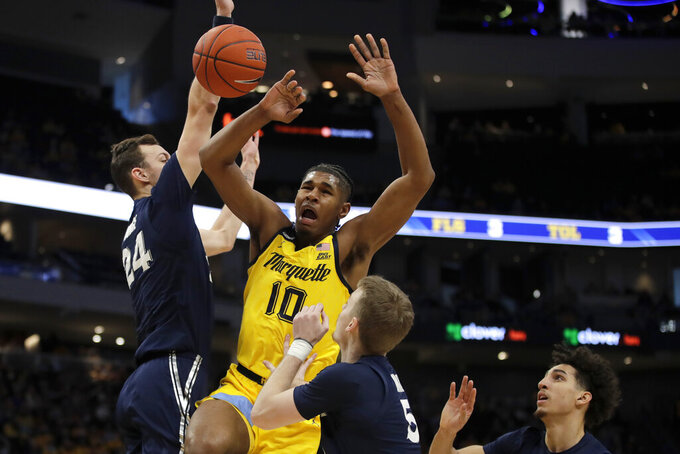 Marquette's Justin Lewis (10) loses control of the ball between Xavier's Jack Nunge (24), Adam Kunkel (5) and Colby Jones after being fouled during the first half of an NCAA college basketball game, Sunday, Jan. 23, 2022, in Milwaukee. (AP Photo/Aaron Gash)

Paul Scruggs scored on a layup to get Xavier within 64-59, but the Musketeers did not get another field goal until Jack Nunge’s basket with 34 seconds left to make it 73-64.

“What won us the game was defense down the stretch,” Marquette coach Shaka Smart said. “We really played well on the defensive end, from an aggressiveness standpoint getting our hands on the basketball. And then Justin Lewis grabbing the ball for us, 13 defensive rebounds is probably the most important stat of the game.”

Xavier hit its first six shots of the second half, but was just 5 of 26 the rest of the way.

“What can’t happen is when a couple of those good shots don’t go in, you can’t then all of a sudden try to play hero basketball,” Xavier coach Travis Steele said. “Because I thought the rest of the way, our guys were forcing things on the offensive end, whether it was a shot or a drive that maybe wasn’t there.”

Darryl Morsell scored 19 and Kam Jones added 12 points for Marquette (14-6, 6-3 Big East), which shot 53% in the second half for its sixth consecutive victory.

“A heck of an effort by our guys. I thought Xavier just did a great job continuing to fight and battle,” Smart said. “The way they started the second half, they showed tremendous aggressiveness and got us on our heels.”

Kam Jones converted a steal into a layup at the other end to put the Golden Eagles up by five with just under eight minutes left.

Marquette has won six straight after losing four in a row.

“Losing four in a row, we got humbled by UCLA and then we had three conference games where we were in position to win the game, late in the game, and we didn’t,” Smart said. “I think what you take out of that as a team, is we can win, we can find a way to win those games, but we’ve got to be a little bit better in a variety of areas. And, I think we’ve continued to get better.”

Xavier: The Musketeers are 3-3 in their last six games after an 11-1 start. “Nobody’s going to feel down for us or feel sorry for us,” Steele said. “We’ve got a big challenge on Wednesday night with Providence (16-2 6-1), who I believe is first in our league right now”

Marquette: After a road game at Seton Hall, the Golden Eagles face three ranked teams in a row – at No. 21 Providence, home vs. No. 11 Villanova and then on the road at No. 25 UConn. Marquette already has beaten Providence and Villanova.

Coupled with a 57-54 victory at No. 11 Villanova on Wednesday, Marquette could crack the Top 25. The loss could cost Xavier a spot in the rankings.

Xavier hosts No. 21 Providence on Wednesday.

Marquette is at Seton Hall on Wednesday.