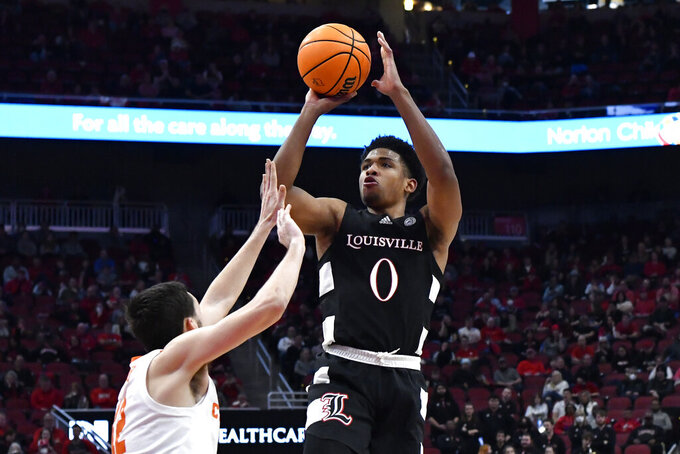 The win snaps a seven-game losing streak for Louisville (12-14, 6-10 ACC) in which six losses were to teams with double-digit wins in the ACC. Pegues was the coach for five of the losses after replacing Chris Mack.

Malik Williams scored to put the Cardinals ahead for good, 54-53, with 6:32 remaining. Three of Louisville’s final five baskets were 3-pointers as they finished the game on a 13-5 run.

Williams finished with 12 points and Ellis had 11. Jae'Lyn Withers had 10 rebounds for the Cardinals, who improved to 7-0 all-time at home against Clemson.

Clemson led 31-28 early in the second half before Locke and El Ellis shot four consecutive 3-pointers for Louisville, giving the Cardinals a 40-31 lead. Again, Louisville’s made 3-pointers came in bunches as the Cardinals finished 8 of 29 (27.6%) from 3-point distance.

Louisville took an early lead and was ahead 19-11 before Hunter had a three-point play and a 3-pointer to get the Tigers within two. The teams stayed within two points of each other for the final six minutes of the half and Louisville led 28-27 at the break.

Clemson's P.J. Hall, who scored a career-high 28 points in a loss to Florida State on Tuesday, injured his foot in the first half and did not return.