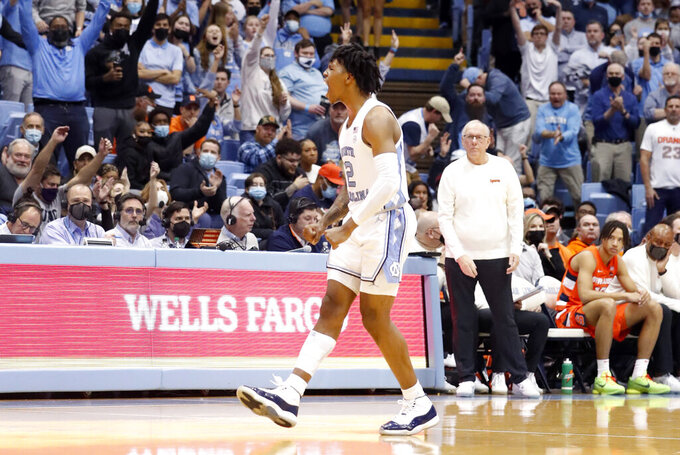 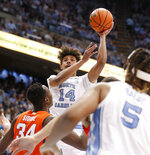 North Carolina's win came despite a season-high 36 points from Cole Swider of Syracuse. He made 14 of 21 shots, including 7 of 11 from 3-point distance, before fouling out late in overtime.

Love's 3-pointer gave North Carolina a 70-69 lead with 2:20 remaining in regulation. His 3-pointer with 8 seconds left gave UNC a 73-71 lead before Joe Girard III tied it with a tough 15-footer from the baseline.

Love struck again early in overtime, his 3-pointer giving the Tar Heels a 78-73 lead with 3:54 to go. RJ Davis hit a 3-pointer on North Carolina's next possession and the Tar Heels were in control with an eight-point lead.

The win assures North Carolina (22-8, 14-5 ACC) of a top-four finish in the ACC and a double-bye in the conference tournament. North Carolina finishes the regular season at Duke on Saturday. A win over Duke or a loss by Miami (12-6 ACC), which has two games remaining, would give the Tar Heels third place outright.

Syracuse (15-15, 9-10) faces the prospect of the first losing season in Jim Boeheim's 46 years as coach. The Orange finish the regular season at home against Miami on Saturday.

North Carolina's Armando Bacot had 17 points and 18 rebounds for his 23rd double-double of the season, tying the North Carolina record set by Bryce Johnson in 2015-16. Love finished with 21 points, Davis had 17 and Leaky Black added eight points, seven rebounds and seven assists. Manek had five rebounds and three assists.

Buddy Boeheim scored 14 points and Jimmy Boeheim had 10 for Syracuse.

Swider scored 21 points in the first half for Syracuse, shooting 8 for 10 overall and 5 for 6 from 3-point distance. Swider’s fifth 3-pointer of the half drew Syracuse within 35-34 with 2:08 remaining before North Carolina closed it out with a 6-2 run for a 41-36 halftime lead.

Carolina is 15-6 against the Orange, including 11-3 since Syracuse joined the ACC, and has never lost to Syracuse at the Smith Center (6-0).