Marquette looking to make another leap in Smart's 2nd season 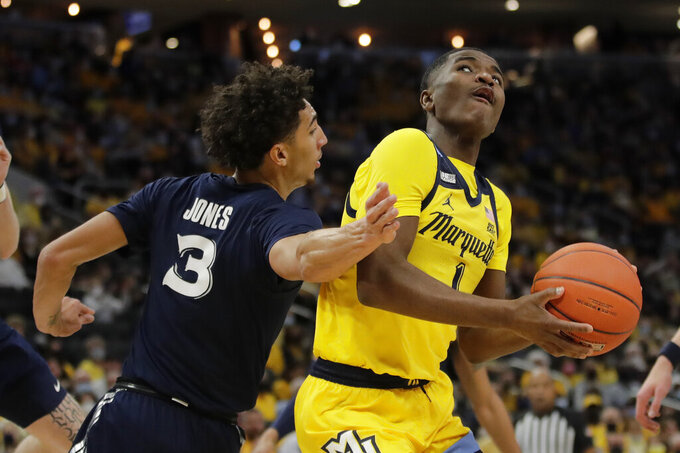 FILE - Marquette's Kam Jones looks for a shot past Xavier's Colby Jones (3) during the first half of an NCAA college basketball game Jan. 23, 2022, in Milwaukee. Marquette is counting on Jones to develop into one of the Big East’s better players in his sophomore season. The Golden Eagles have emphasized how he needs to get to the foul line more often after attempting just 18 free throws last season. (AP Photo/Aaron Gash, File)

MILWAUKEE (AP) — Marquette wants to build on the strides it made last year in coach Shaka Smart’s debut season.

The Golden Eagles went 19-13 and reached the NCAA Tournament, a marked improvement from their 13-14 performance in 2020-21 that resulted in Steve Wojciechowski’s firing. But a late-season slide showed that Marquette still has plenty of room for improvement as it tries to develop into a legitimate Big East contender.

That could take some time. Marquette must replace three of its top four scorers from last season, including first-team all-Big East selection Justin Lewis.

“The guys have really done a good job of kind of building some habits,” Smart said.

But he added that the Golden Eagles still have a long way to go as they get ready for the season with a relatively inexperienced roster.

Kolek’s 5.9 assists per game last season ranked him eighth among all Division I players.

Even with those three back, there’s skepticism about whether Marquette has enough firepower to make much noise in the Big East this season. A preseason poll of the league’s coaches had Marquette finishing ninth out of 11 teams. Marquette also was picked ninth last year but ended up in a tie for fifth.

“This league is going to be, I would say, as competitive as or more competitive than any league in the country,” Smart said.

Zach Wrightsil is making the unusual move from an NAIA school to a Big East program. The 6-7 forward was the NAIA player of the year last season, as he averaged 18.7 points. 8.8 rebounds and 3.6 assists while helping Loyola-New Orleans win the NAIA title.

“This is a big jump for him level-wise,” Smart said. “The big thing is he’s got it in him. He’s got a real poise and character to him that I think is going to win out.”

The Golden Eagles won seven straight games in January, with four of those victories coming over teams that were ranked at the time. But they dropped six of their last nine games and got trounced 95-63 by North Carolina in the first round of the NCAA Tournament.

Marquette will need to get better on the boards this season. The Golden Eagles were outrebounded by an average of 4.6 boards per game last season, giving them the Big East’s worst rebound margin.

They were outrebounded 52-37 in their NCAA Tournament loss.

Marquette is counting on Jones to develop into one of the Big East’s better players in his sophomore season. The Golden Eagles have emphasized how he needs to get to the foul line more often after attempting just 18 free throws last season.

The Golden Eagles also are hoping for bigger contributions from sophomores David Joplin and Stevie Mitchell after each of them scored just 2.8 points per game last season. Mitchell averaged 10.3 minutes and Joplin 7 minutes, but both should get more opportunities this season.

Marquette opens the season Nov. 7 by hosting Radford. Notable non-conference games include home matchups with No. 5 Baylor on Nov. 29 and Wisconsin on Dec. 3 plus trips to Purdue on Nov. 15 and Notre Dame on Dec. 11.

The Golden Eagles have their Big East opener Dec. 16 when they host No. 9 Creighton, the preseason conference favorite.