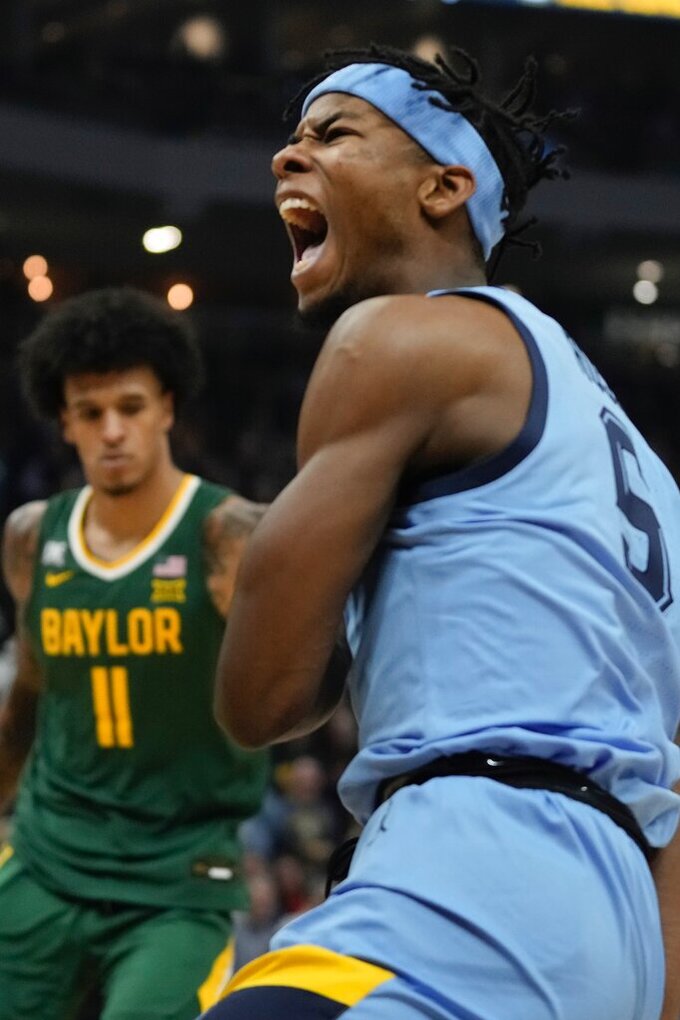 Marquette's Chase Ross reacts after his dunk during the first half of an NCAA basketball game Tuesday, Nov. 29, 2022, in Milwaukee. (AP Photo/Morry Gash) 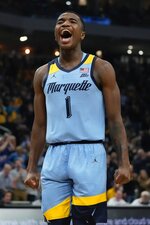 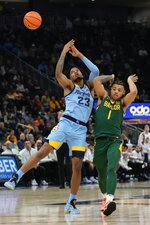 MILWAUKEE (AP) — Marquette has developed a habit under Shaka Smart of saving its top performances for the best opponents on its schedule.

Olivier-Maxence Prosper scored 24 points and Marquette capitalized on a dominant start from its defense to roll past No. 6 Baylor 96-70 on Tuesday night in the Big 12-Big East Battle. This was the highest-ranked team Marquette (6-2) has beaten under Smart and the Golden Eagles improved to to 7-6 against AP Top 25 squads in his tenure.

“Most of the time against these great teams, they don't have us winning that game," said David Joplin, who scored 19 points. “We just come out, we want to go out and prove everybody wrong. And that feeling, that chip makes us play so much better.”

Marquette nearly produced its most lopsided victory against a Top 25 team. The Golden Eagles trounced No. 16 Providence 88-56 on Jan. 4 in Smart's debut season.

“When you go into a game and the game is bigger in the minds of your players than anything else, to me that’s the best recipe for winning,” Smart said. “It should be that way all the time, but human nature sometimes messes with that.”

The Golden Eagles raced to a 51-25 halftime lead thanks to a 24-0 edge in points off turnovers. Baylor (5-2) already had a season-high 16 turnovers by halftime.

Baylor entered Tuesday ranked third among Division I teams in assist-turnover margin. The Bears had 20 turnovers and 12 assists against Marquette.

“I didn't see that coming,” Baylor coach Scott Drew said. “Credit the crowd. Credit them for building momentum. Credit Shaka for having them prepared and how hard they played. At the end of the day, we fed to the fire by turning it over and making some uncharacteristic mistakes.”

Prosper scored 10 points and sank two 3-pointers during a 23-2 run that turned an early 7-2 deficit into a 25-9 advantage. Chase Ross capped the spurt by getting a steal and throwing down a left-handed dunk.

Baylor never cut Marquette's lead below 22 points in the second half.

Kam Jones had 20 points as Marquette shot 58.3% overall to win its third straight. The Golden Eagles shot 12 of 25 from 3-point range, with Jones going 4 of 7 and Prosper and Joplin each going 3 of 4.

Baylor's LJ Cryer had 17 of his 19 points, in the second half. Adam Flagler had 16 and Keyonte George added 12 for the Bears.

Baylor: The Bears shot 48.2% (27 of 56) but had no answers for Marquette's defense and dug too deep a hole. Baylor rallied from a 25-deficit to force overtime in an NCAA Tournament loss to North Carolina last season, but the Bears never mounted any kind of comeback Tuesday.

Marquette: After losing to Purdue and Mississippi State earlier this season, the Golden Eagles delivered the kind of performance that showed they're capable of beating anyone. Marquette will try to prove that again when it hosts Wisconsin on Saturday.

Marquette came out of its locker room wearing shirts with No. 24 to honor George Thompson, who died in June of complications from diabetes. Thompson played for Marquette from 1967-69, and he was the school’s career scoring leader for 40 years.

Tuesday would have been Thompson's 75th birthday. A No. 24 banner with Thompson’s name hangs from the Fiserv Forum rafters.

“I really felt like we needed to win tonight to honor George,” Smart said. “If you make it George Thompson Night, you couldn't lose.”