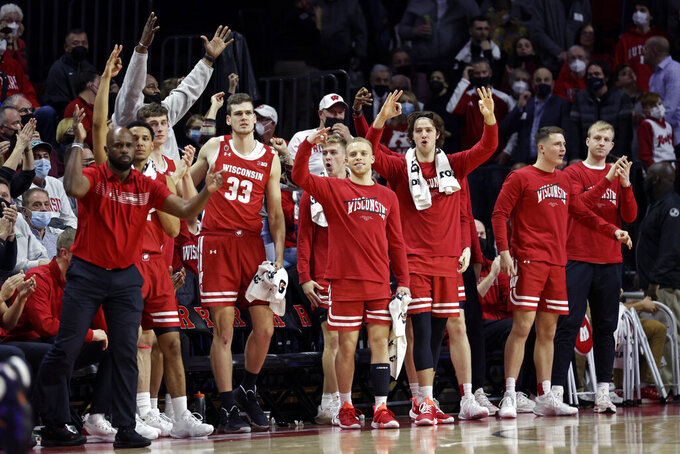 The Wisconsin bench reacts after a 3-point basket against Rutgers during the second half of an NCAA college basketball game Saturday, Feb. 26, 2022, in Piscataway, N.J. (AP Photo/Adam Hunger) 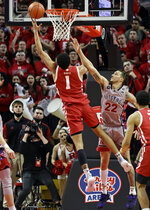 PISCATAWAY, N.J. (AP) — While they weren't the preseason favorite to win the Big Ten Conference, Wisconsin coach Greg Gard said that's been his team's goal since the start of the season.

“This group has had a Big Ten championship in their sights since we started in the offseason,” Gard said Saturday night after Wisconsin took over first place with a hard-fought 66-61 road win over Rutgers. “This is a group that’s stayed the course and continued to take it one day at a time.”

As usual, Johnny Davis led the way, scoring 15 of his 19 points in the second half. He had a lot of help as Brad Davison added 14 points, Chucky Hepburn had 13 and Tyler Wahl had 11 in helping the Badgers win their fourth straight game and improve to 14-1 in games decided by six points or less.

Wisconsin can win the title on Tuesday when it plays host to No. 4 Purdue, which lost to Michigan State. The Badgers won the earlier meeting.

“You know, we got a big win Tuesday,” Davis said. “Obviously, Purdue is a really good team and we know we’re playing for that game.”

Ron Harper Jr. added 15 points for the Scarlet Knights, who have now lost three in a row after a four-game winning streak — all against ranked teams.

Trailing by 11 at the half, Rutgers rallied in the final 20 minutes and took its first lead at 51-50 on a foul-line jumper by Baker. The lead changed hands before Davis, who was frustrated by non-calls most of the game, drove the lane for a layup with 5:39 to play for a 56-55 edge. Hepburn would add a 3-pointer less than a minute later and Wisconsin led 59-55.

“I figured I would get a call sooner or later,” Davis said, who finished 6 of 19 from the field. “You know, they gave me a few in the second half, but it was really frustrating because Caleb McConnell was a really good defender.”

A layup by Wahl after a free throw by Rutgers' Cliff Omoruyi made it 61-56 but Rutgers never got closer than 63-61 after Harper hit a 3-pointer with 28 second to play. A free throw by Wahl five seconds later gave Rutgers on last shot but Baker missed it.

Baker was not made available to the media after the game, but teammates noted he was the reason the game was close at the end.

Wisconsin built a 33-23 halftime lead and it was Davison and Hepburn who carried the load. Davison hit three 3-pointers and scored 11 points, while Hepburn had 10. The Scarlet Knights made only nine baskets in first 20 minutes and did not make a 3-pointer. They also missed four free throws, with two at the front end of a one-and-one opportunity.

Wisconsin: Will likely get a very high seed in the NCAA Tournament.

Rutgers: Needs a win or two next week to assure itself a second straight NCAA trip.

“This group has overcome adversity,” Harper said. “You know, they told us our season was dead so many times now. We just keep fighting and just keep to keep pushing and keep fighting through adversity. And there’s no doubt that this team can get it done.”

Wisconsin: Hosts No. 4 Purdue on Tuesday.

Rutgers: At Indiana on Wednesday.