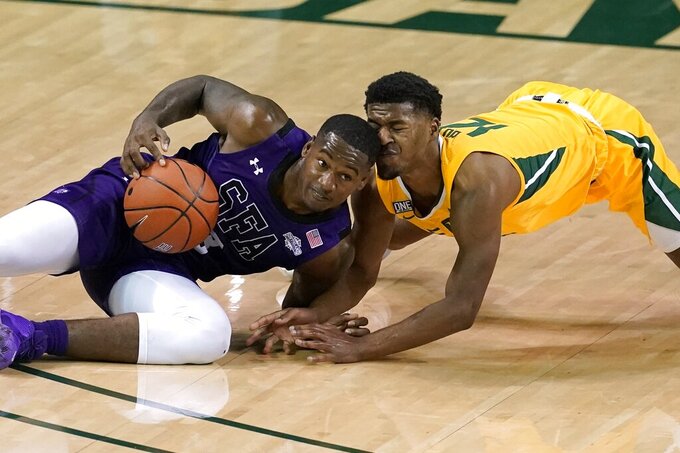 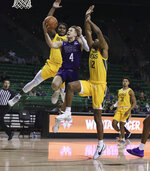 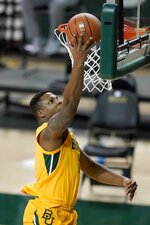 WACO, Texas (AP) — Davion Mitchell and No. 2 Baylor came into this most unusual season ready for unexpected changes. The unbeaten Bears have responded well when they actually get a chance to play.

Adam Flagler scored 11 of his 14 points before halftime as Baylor took control early on the way to an 83-52 win Wednesday night over Stephen F. Austin. It was the home opener for the Bears — a day later than scheduled and against a different opponent than planned.

“We’re just blessed to have this opportunity. I mean, we kind of knew how this season was going to go,” said Mitchell, who had 11 points, seven assists and four steals.

It was the first game for the Bears (4-0) since a much-anticipated showdown against No. 1 Gonzaga was called off only 90 minutes before tipoff Saturday, and after expected home-opening opponent Nicholls State had virus issues like the Bulldogs did.

“Well, I think they laugh every time I give them updates. Like, what do we got now?” coach Scott Drew said. “When you know it’s game day and the ball is going to get tipped, you’ve got to make the most of it, because I can tell you they'd much rather be playing games right now than practicing.”

Five players scored in double figures as Baylor played for the first time since an 82-69 win over then-No. 5 Illinois at the Jimmy V Classic in Indianapolis a week earlier. That was the only one of the first six games on their initial schedule that the Bears have played.

Flagler's 3-pointer in the closing seconds of the first half was the Bears' third 3 in a row — LJ Crayer and Matthew Mayer had the others — as part of a half-ending 11-2 run that put them up 38-22.

“Coming off finals, I was obviously worried about the players’ energy and rhythm with not practicing as much,” Drew said. “But I thought they did a great job. That run at the end of the first half and the beginning of the second half was really the difference.”

The Lumberjacks had 17 turnovers by halftime and finished with 35 that led to 40 Baylor points. Mitchell drew several charges on the defensive end.

“I know when they’re running full speed and they hit my chest, the ref is always going to call it, because they’re out of control,” Mitchell said. “So I just fall and yell.”

Jonathan Tchamwa Tchatchoua, like Flagler a sophomore who redshirted with the Bears last season after transferring into the program, added 13 points. Preaseason Big 12 player of the year Jared Butler had 12 points, and Mayer scored 10.

The Lumberjacks, who went 28-3 last season, had won 15 games in a row before the 2019-20 campaign came to a sudden stop during conference tournament week and the NCAA Tournament was canceled because of the virus.

There was a drastically different feel in the 10,284-seat Ferrell Center when the preseason Big 12 favorites played their home opener. The announced attendance was 2,350, the maximum reduced capacity, though some of those tickets likely went unused.

Fans were socially distanced throughout the arena and there were only a handful of students — on-campus classes wrapped up by the Thanksgiving break. Most of those were in the pep band that sat in the upper rows and the cheerleaders in another seating section off the floor.

Stephen F. Austin: With all the turnovers, the Lumberjacks were never going to be in position to pull off another upset in Waco as they did two years ago. SFA scored the game's final seven points in that game, winning 59-58 when former guard Shannon Bogues drove for a buzzer-beating layup.

Baylor: The Bears, who returned four starters from last season, got 43 points from their bench players against SFA.

“If we were going to try to make this run to the national championship, I think it’s good to have great players on the bench,” Mitchell said. “The starters can’t score all of the time, they’re not always going to have good nights. So it’s great to have someone on the bench that can be starters."

Baylor: Plays its Big 12 opener at home Sunday against No. 13 Texas.