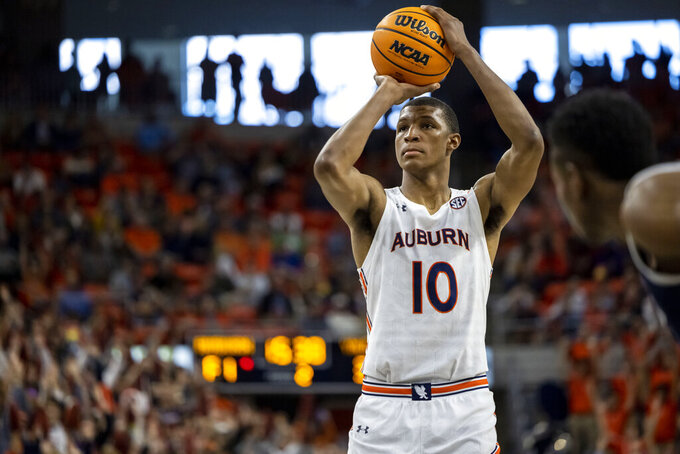 Auburn forward Jabari Smith (10) shoots a free-throw against Yale during the second half of an NCAA college basketball game, Saturday, Dec. 4, 2021, in Auburn, Ala. (AP Photo/Vasha Hunt) 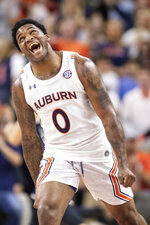 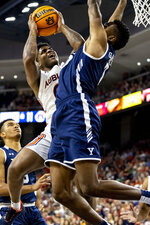 Johnson, who transferred from Georgia this offseason, overcame an injury scare in the first half to lead the Tigers in scoring. The win marked the fifth straight game in double-digit points for Smith, a 6-foot-10 forward who is widely projected to be an early selection in the 2022 NBA draft.

Auburn (7-1) had five players score in double figures. Zep Jasper, Devan Cambridge and Dylan Cardwell all finished with 10 points, and Cambridge had 10 rebounds for his second career double-double.

“We played hard, and the defense was good,” Auburn coach Bruce Pearl said. “The depth continues to be a positive for us. ... We’ve got a lot of things to work on, a lot of things to get better on, but Yale’s got a chance to win the Ivy League. That could be a win against the (NCAA Tournament) field.”

The Tigers blocked 14 shots from Yale (5-5), including eight in the first 10 minutes of the game. Walker Kessler, who exited in the first half due to injury, had four blocks in just eight minutes of action.

Yale had a difficult time matching up with the size of Auburn and shot 32% from the field for the game, compared with 44% for the Tigers.

“That’s our identity this year, I feel like: If we start off well defensively, we’re going to have a good game,” Cambridge said. “We treat every opponent the same, you know? We can’t take anybody for granted, so I think we’re just playing how we play now.”

Auburn’s 14 blocks, just three off of the program record, were the most the Tigers have recorded in a game under Pearl. With Kessler sidelined, backup centers Cardwell and Babatunde “Stretch” Akingbola each had three.

“Walker had a great first half, but in the second half, he was a little banged up,” Johnson said. “Dylan came in and sparked right up. And Stretch came in and protected the goal for us as well. So, when we can have a trio with the centers, you know, we’re going to be hard to beat.”

GETTING TO THE POINT

“Zep is always pretty cautious and he’s got one of the best assist-to-turnover ratios in the country,” Pearl said. “Wendell can do more creative things. ... It’s great, because it tells us we can get organized and we can get into stuff to put our players in advantageous situations.”

Yale: While Yale was unable to counter Auburn’s height advantage, it stayed competitive throughout the first half with strong 3-point shooting. That most likely will be the key to the Bulldogs’ chances of finishing nonconference play strong and competing for another Ivy League title.

Auburn: Defense has been Auburn’s calling card so far this season, and that was no different Saturday. But the recent run of scoring from Johnson and Smith has been a big boost for a new-look offense still trying to develop consistency before Southeastern Conference play.

Auburn travels to Atlanta for a neutral-site matchup against Nebraska next Saturday.