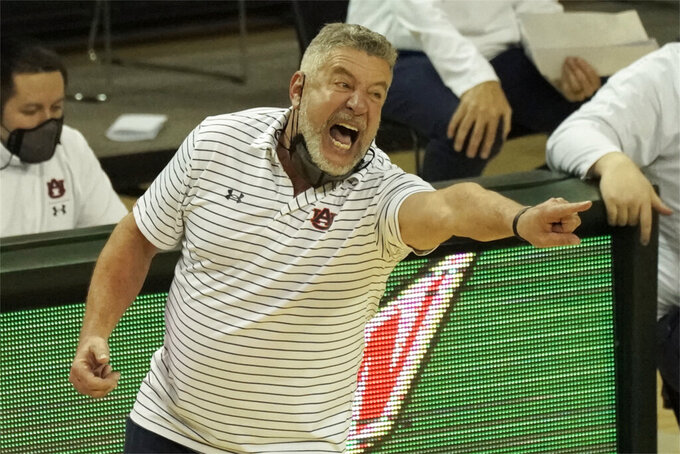 FILE - Auburn head coach Bruce Pearl argues a call during the second half of an NCAA college basketball game against Baylor in Waco, Texas, in this Saturday, Jan. 30, 2021, file photo. earl has rebuilt Auburn's roster once again, only this time with expectations for immediate success. (AP Photo/Chuck Burton, File)

Bruce Pearl has restocked Auburn's roster once again, only this time with expectations for immediate success.

The preseason No. 22 Tigers' coach bolstered his team with talented transfers like North Carolina 7-footer Walker Kessler, Georgia guard K.D. Johnson and five-star recruit Jabari Smith after a down year that followed the program's best three-year run in history.

For the second straight year, Auburn could have a new starting five but it will feature some transfers with college experience — and plenty of talent.

“We won’t be as young, but we will clearly be as new,” Pearl said. “What does that mean? We’re not going to be as good early as we will be later. We’re just going to be a team that gets better throughout the season.”

He also knows this team has the talent for a high ceiling, three years after the program made its first Final Four trip. That's despite losing one-and-done players Sharife Cooper and JT Thor, both second-round NBA draft picks.

The NCAA Tournament is a much more realistic prospect this season.

The four transfers will add to a roster that includes Pearl's prized recruit, the 6-foot-10 forward Smith, a consensus top-5 prospect according to the recruiting services and the program's top-rated signee. Smith averaged 24.5 points, 10.8 rebounds and 2.8 blocks per game at Sandy Creek High School in Tyrone, Georgia.

“You’re just going to see me playing hard, playing my game,” Smith said. “Really just trying to prove to everybody that I am what they think I am. You can’t really think about points and things like that, you just have to go out there and play hard, play unselfish. Just play the game the right way.”

Eastern Kentucky transfer Wendell Green Jr. is expected to take over at point guard, along with College of Charleston's Zep Jasper.

Those two and Johnson, a four-star recruit a year ago, all averaged more than 13 points last season for other teams.

Guard Allen Flanigan is the top returning scorer but is out until at least mid-December recovering from Achilles surgery. Other returnees include guard Devan Cambridge (8.9 points per game) and forward Jaylin Williams (10.9 ppg).

The 7-foot-1 Kessler was a five-star prospect who played a reserve role for the Tar Heels but improved his production late in the season.

If Auburn is to make a postseason run, it will need improved defense. The Tigers allowed 76.4 points a game last season, which ranked 301st nationally.

Green or Jasper is set to be Pearl’s fourth starting point guard in as many seasons. The 5-foot-11, 175-pound Green and Jasper both averaged nearly 16 points last season for their respective programs..

“They’re obviously stepping up in class, so that’ll be their great challenge,” Pearl said. “Wendell’s a pure shooting point guard. Zep is a combo guard that affects the game both offensively and defensively. And K.D. Johnson is probably our third option.”

Flanigan had surgery to repair a ruptured right Achilles tendon in June and was expected to miss 12-14 weeks. He averaged 14.3 points and 5.5 rebounds and is the SEC's No. 4 returning scorer.

The Tigers are hoping he can return by sometime in December.

Kessler and Smith are big — literally — additions to a front court that also includes 6-11 center Dylan Cardwell and 6-10 Babatunde Akingbola. It's a change of roster makeup for Pearl, and perhaps style.

“That’s the deepest and the biggest and the most talented frontline that I’ve had,” the coach said. “I’ve always been sort of undersized, playing small ball. Now we’re going to be a lot bigger. We’re going to see, hopefully, if our system can make that adjustment and take advantage of our size.”

The Tigers have seven nonconference home games — including Oklahoma on Jan. 29 in the Big 12/SEC Challenge — four at neutral sites and two true road games. They'll face UConn in the Battle 4 Atlantis and possibly Michigan State.