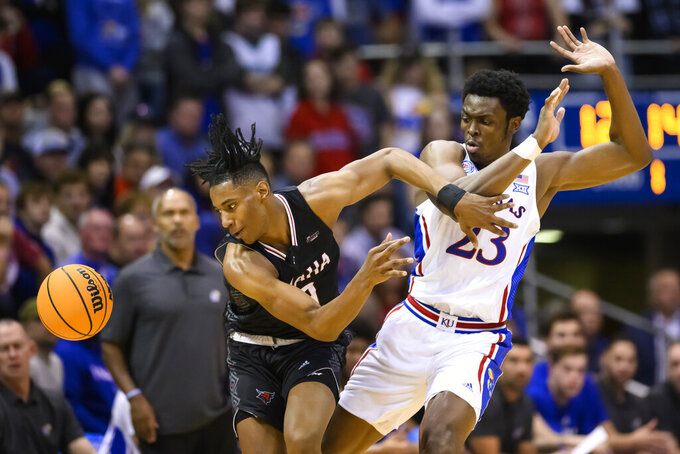 LAWRENCE, Kan. (AP) — There was a moment just before halftime Monday night when Kansas forward Jalen Wilson watched an Omaha player bury a 3-pointer at the buzzer, and he looked over at the bench expecting to catch Bill Self's wrath.

Only the Jayhawks' coach wasn't there.

Self was serving the first game in a school-imposed four-game suspension, along with assistant Kurtis Townsend, so Wilson and the rest of the Jayhawks got a reprieve from one of their coach's pet peeves. The buzzer-beater hardly mattered in the end, either, as No. 5 Kansas began its national title defense with an 89-64 rout of the Mavericks.

“One thing about our team, no matter what year it's been, we always step up no matter when we have adversity,” said Wilson, who had 19 points and 11 rebounds. “We came together. We wanted to set the tone for the year. And we have the greatest coaching staff in America. It doesn't matter who is out there leading us.”

In this case it was Norm Roberts, one of Self's longtime assistants and the former St. John's head coach, calling the shots.

Self and Townsend were suspended last week as part of the fallout from a 2017 federal investigation into college basketball corruption. The case against Kansas has been mired in an independent review process for years, so the school self-imposed the penalties rather than continue waiting for a resolution.

“It was a lot of fun. The arena has a lot of energy,” Roberts said. “Our guys felt that energy and pushed us forward.”

Despite returning only two starters from the team that rallied to beat North Carolina in the national championship game, the new-look Jayhawks built a double-digit lead by the midway point of the first half and never looked back.

Jaeden Marshall scored 13 points and Luke Jungers had 12 for the Mavericks.

Wilson, who declared for the NBA draft before returning to school, showed he can go from being a talented role player to an unequivocal leader. He drained three early 3-pointers, kept getting easy baskets by cutting to the rim, and was just as good at the defensive end, where he made every shot difficult for the undersized Mavericks.

Meanwhile, Dick lived up to the expectations that come with being a five-star and top-20 national prospect. The rangy forward from Kansas prep powerhouse Sunrise Christian Academy knocked down his first two 3-pointers and, like Wilson, showed a natural ability to get easy baskets at the rim.

“I grew up dreaming about this night,” Dick said, “and watching guys before me and wanting to be in their shoes.”

The Mavericks, picked to finish second-to-last in the Summit League, did their best to hang around into the second half, and they even closed to 50-43 on a 3-pointer from Jungers with 16:52 left.

That's when the Jayhawks turned up their defense, got into transition and began hitting 3s.

They rolled off 10 straight points to restore their cushion, then went on another 15-point run a few minutes later, turning a 68-55 lead into an 83-55 advantage and allowing Roberts to empty the bench down the stretch.

“We always take care of business at home,” Wilson said. “Just trying to set the tone for the year.”

Kansas got off to a slow start against Pittsburg State in its exhibition game, and it had plenty of sluggish moments through the first 25 minutes against the Mavericks. The Jayhawks might be able to overcome those against North Dakota State on Thursday night, but they'll have a much tougher time against No. 7 Duke in next week's Champions Classic.

The Mavericks visit Nebraska and the Jayhawks play the Bison on Thursday night.