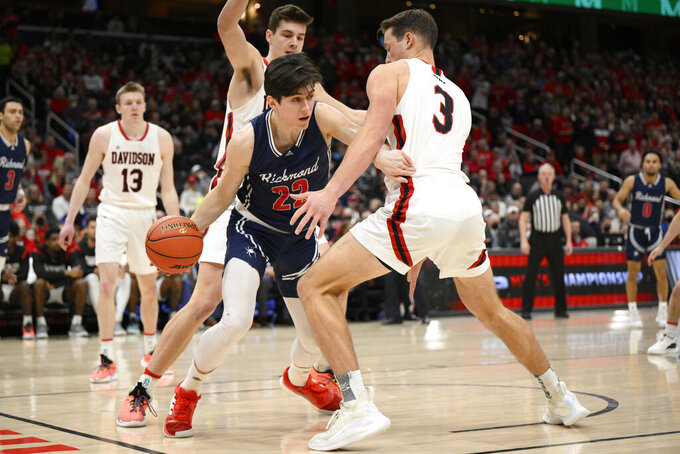 Richmond guard Andre Gustavson (22) tries to get past Davidson forward Sam Mennenga (3) and forward Luka Brajkovic, back, during the first half of an NCAA college basketball game in the championship of the Atlantic 10 conference tournament, Sunday, March 13, 2022, in Washington. (AP Photo/Nick Wass)

WASHINGTON (AP) — Jacob Gilyard scored 26 points, Tyler Burton had 16 points and 12 rebounds and No. 6 seed Richmond beat top-seeded Davidson 64-62 on Sunday to clinch the Atlantic 10 Conference tournament and an NCAA Tournament berth for the first time in 11 years.

Richmond (23-12) was playing in the A-10 championship game — needing two 15-point comebacks in the early rounds — for the first time since winning in 2011. The Spiders are making their 10th trip to the NCAAs, the first since making the Sweet 16 in that 2011 season.

With Davidson's 27-6 record and resume, Richmond's win likely knocked out a bubble team.

The Spiders lost a home game to Davidson 87-84 on Jan. 14 when Michael Jones hit a game-winning 3-pointer with three seconds remaining. Jones had another chance to win this game, getting an inbounds pass with 1.7 seconds left, but his contested 3-pointer from the corner didn't hit the rim as time expired.

Richmond went six-plus minutes without a field goal down the stretch until Burton completed three-point plays on back-to-back possession to get the Spiders within 62-60. Davidson dribbled down the clock and missed a 3-pointer and Burton missed a baseline jumper at the other end but his airball went off a Davidson player.

After a timeout, Matt Grace powered into the lane and completed another three-point play — his first points of the game — to give Richmond a 63-62 lead with 19.1 seconds left. Foster Loyer had a good look at a 3-pointer at the other end but it rolled out and Gilyard, an 85.7% free-throw shooter, was fouled before making 1 of 2 free throws at 2.9.

Davidson called a timeout at 2.5 and Richmond called another after seeing how the Wildcats set up. Davidson made a half-court pass and called another timeout with 1.7 left, but Jones' shot was off.

Gilyard was 9 of 18 from the field, including a long jumper early in the second half to reach 2,000 career points, becoming just the fifth player in program history to do so.

Sam Mennenga scored 18 points and Jones finished with 17 for Davidson. Luka Brajkovic, the A-10 player of the year, had 13 points and 11 rebounds.

Mennenga made his fourth straight 3-pointer to give Davidson a 49-42 lead with 10:03 remaining but the Wildcats didn’t make their next field goal until Brajkovic at 4:45. Richmond tied it on three different occasions during Davidson’s field-goal drought but couldn’t take the lead until the closing seconds.