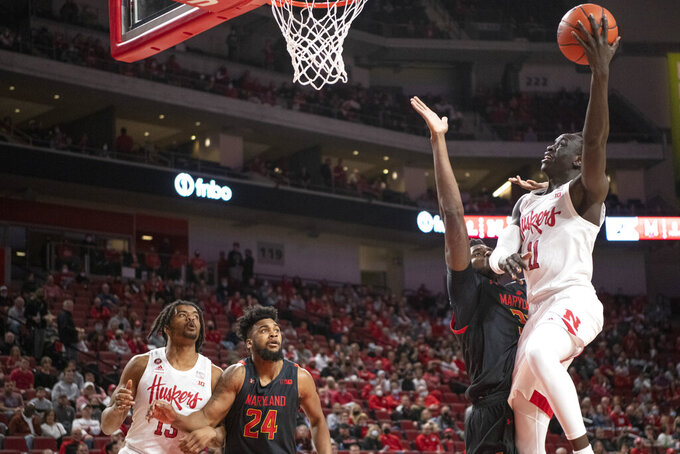 Nebraska's Lat Mayen (11) goes for a layup against Maryland during the first half of an NCAA college basketball game Friday, Feb. 18, 2022, in Lincoln, Neb. (Jaiden Tripi/Lincoln Journal Star via AP)

Maryland shot 73% through the first 10 minutes of the second half, turning a two-point halftime lead into a 73-54 advantage. Donta Scott led the 31-14 run with nine points. Maryland finished the half at 59% and shot 52.5% for the game. The Terrapins had only four turnovers in the game.

A 3-pointer and a three-point play by Bryce McGowens helped draw the Cornhuskers within 82-68 near the four-minute mark. Nebraska scored its next six points from the free-throw line and it was 84-74 with 2:25 to go. Nebraska did not score again.

Leading scorer Eric Ayala (15.1 ppg) returned to the lineup after an injury kept him out of Maryland’s near-upset of then-No. 3 Purdue on Sunday. Ayala scored two points, going 0-for-3 from the field, in 24 minutes of play.

Maryland trailed 19-14 nine minutes into the game before Reese scored seven points in an 11-2 run for a 25-21 lead near the eight-minute mark. Their were six lead changes in the remainder of the half and Maryland led 42-40 at the break.

It was the 13th meeting between the two teams that joined the Big Ten during the conference's expansion era. Maryland leads 10-3.