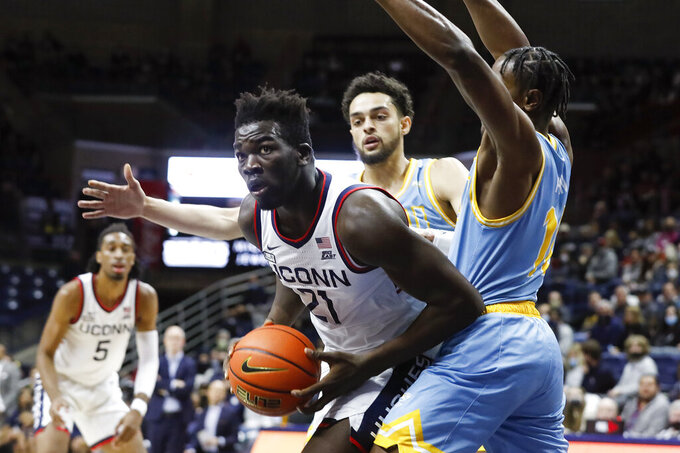 STORRS, Conn. (AP) — As long as UConn is playing up to its defensive standards, the Huskies say they aren't going to worry about a slow offensive start.

No. 23 Connecticut hit just three of its first 12 shots on Wednesday, but held an overmatched Long Island University to just 14 field goals for the entire game in a 93-40 rout of the Sharks.

“We know if our shots aren't falling, we're not really worried about that because they're going to fall eventually; we're going to make plays eventually," Polley said. “It's what we do on the defensive end. When we lock in there, I think we're hard to beat.”

The Huskies held LIU to 27% shooting, outrebounded the Sharks 48-30, and blocked 10 shots.

Andre Jackson had three of those blocks, including one to break up an ally-oop dunk. He also scored 14 points, pulled down five rebounds and had two steals for UConn (3-0). Jalen Gaffney and Adama Sanogo each had 11 points and Tyrese Martin added 10 points and seven boards.

The Huskies led by 16 points at halftime and opened the second half on a 14-2 run.

Isaac Kante had 16 of his 17 points in the first half for LIU, which has begun the season with three consecutive road losses.

The Huskies trailed 12-9 after eight minutes, before going on a 9-0 run. Jalen Gafney's steal led to a highlight-reel dunk from Jackson that pushed that lead to 27-16.

“He's by far the best athlete I've ever coached - speed, quickness, above the rim,” said UConn coach Dan Hurley. “I mean it's a joke what he can do and he's physically strong and he's an intense individual."

LIU scored just 10 points over the final 7:51 of the first half and trailed 38-22 at the intermission.

“I was pretty happy with my team there for a little while,” said LIU coach Derek Kellogg "I felt that once we realized we couldn’t win, the guys just kind of started playing street ball.”

LIU: This was LIU's first game of the season on the East Coast after falling at San Francisco and Fresno State. Leading scorer Ty Flowers, who came in averaging 17.5 points, was held to just four. ... LIU was 2 of 16 from 3-point range.

UConn: Freshman Jordan Hawkins, a highly touted shooter, made his UConn debut in the second half. Hawkins, who missed the team's first two games with an injured right ankle, had five points, four rebounds and three steals.

UConn used it's entire bench and 12 players scored, including walk-on Matt Garry. The UConn reserves outscored LIU's 47-10. The Huskies scored 30 points on the fast break, while holding the Sharks to just two points in transition.

It was an emotional day for Hurley off the court. He opened his post-game news conference with a tribute to Ryan Preston, a player he recruited to Rhode Island. Preston, who was just 24, when died in a motor vehicle crash in Bahrain.

“For a guy who was born into circumstances that most people would never be able to overcome, the way he thrived at Rhode Island, that incredible place, great university and that community, under the tutelage and mentoring of David Cox, to have a professional career overseas and to be building an amazing life for himself, wheat a tragic loss," Hurley said.