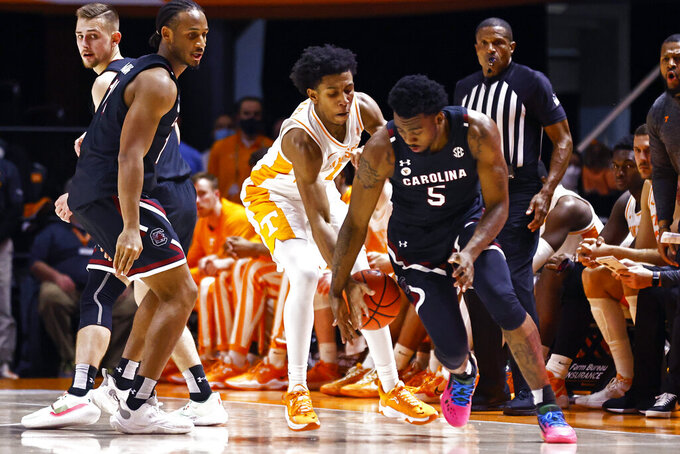 But when the basketball came his way, he didn't have time to think.

Beating the halftime buzzer by a split-second, James drilled his first 3-pointer of the night to give No. 22 Tennessee the momentum it needed for a 66-46 Southeastern Conference victory over South Carolina Tuesday.

James had struggled, hitting just 22% of his 3-pointers coming into the game. But, with the ball in his hands, he didn't hesitate. His 3-pointer was the critical shot in a 12-2 run by the Volunteers (11-4, 2-2) that spilled over into the second half. It turned a game tied at 22 into a Tennessee victory.

“Hitting that shot felt really good,” James said. “As soon as it came out of my hands, I had a real good feel for it.”

“This team looks to Josiah,” said Tennessee coach Rick Barnes. “He had a good look (on the critical 3-pointer).”

Frank Martin, whose Gamecocks fell to 10-5 (1-2), had a different look at the pivotal point of the game.

Tennessee, a team that thrives on 3-point shooting, missed its first five of the first half and didn't connect for the first time until 2 minutes before intermission. That meant the Vols had to overcome their struggles with defense.

“There are going to be struggles on offense,” Barnes said. “We have to put so much effort on defense.”

“Defense travels,” said James. “We rely on defense night-in and night-out. It's a matter of effort and ‘want-to.’”

“(Early in the second half) we're down 12 to the best defensive team in the country,” said Martin. “That's a tough hill to climb.”

Santiago Vescovi led the Vols with 14 points. James finished with 11 points and 12 rebounds. Zakai Zeigler came off the bench to score 11 points and John Fulkerson added 10.

“When (Zeigler) comes in the game, everything is going to change,” Barnes said of the 5-foot-9 freshman. “He brings an energy. He's fearless. He's not going to back down from anyone.”

“James has my trust and respect,” said Martin. “He's big-time.”

South Carolina: In order for the Gamecocks to take any significant steps forward, they need to get production from their inside game. Wildens Leveque (10.5) has been consistent, but big men Josh Gray, Ta’Quan Woodley, Tre-Vaughn Minott and Ja’Von Benson all need to develop.

Tennessee: Big man super senior John Fulkerson flashed signs of being a dominant force down low against Arizona, but hasn’t shown that since, which has frustrated coach Rick Barnes. He has given Fulkerson the word it’s time to resume that mentality. Also, Josiah-Jordan James has struggled shooting the 3-pointer (14-62, 22%) this season. He shot 37% two years ago and 31% last season.

South Carolina: The Gamecocks, who have played and lost to two ranked teams this season (Auburn and Tennessee), have a chance for their second SEC win Saturday at home against Florida, a team that has lost both its league games.

Tennessee: The Vols will have to find their focus in time for a Saturday matinee showdown with No. 18 Kentucky in Lexington.