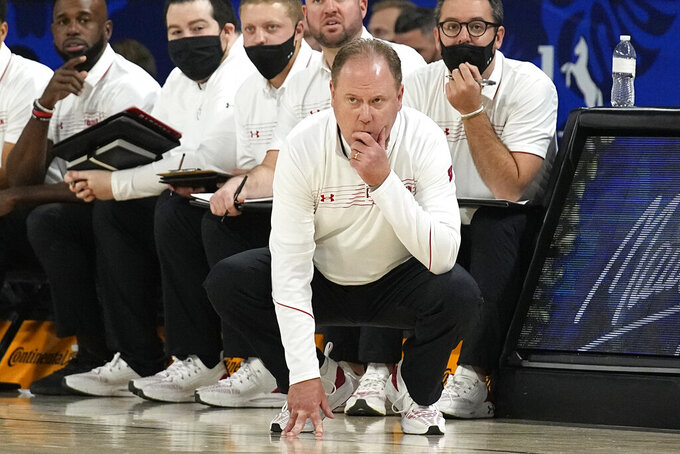 The unknowns kept expectations low, had coach Greg Gard thinking it would take some time for them to gel.

Winning their first Maui Invitational — in Las Vegas, no less — is a good sign the Badgers should be just fine.

“The grit and the resilience, that's always a good starting point,” Gard said. “When your guys play hard, you can live with mistakes. The grit and resolve with this group, I've seen that from the beginning.”

The Badgers (5-1) had reached the Maui title game once in four previous tries, losing to North Carolina in 2016. They had a fight on their hands against the Gaels, battling through a physical second half filled with collisions and tumbling players.

Three days of facing adversity in one form or another, one gigantic trophy for a team picked to finish 10th in the Big Ten.

“There's something about this group, from the first day of practices we compete,” Wahl said.

Saint Mary's (6-1) nearly made its first Maui Invitational appearance a memorable one, keeping the Badgers within reach into the final minute. Not being able to finish it off hurts, but the Gaels appear to be back after being relegated to the NIT last season.

“That’s why you come to this, the best college basketball tournament in the country, to play against really good teams,” Saint Mary's coach Randy Bennett said. “We got to and tonight we didn't come out on top, but I thought we played a good game against a well-coached team and group of guys”

The Maui Invitational was forced to shift east for the second straight year due to the pandemic.

Las Vegas has become a college basketball hotbed during March Madness and has added early-season tournaments to its hoops resume.

Las Vegas is known as the ninth Hawaiian Island, but the vibe just isn't the same — bright lights and big arenas instead of island chill and the quaint Lahaina Civic Center.

The championship game had a different feel, too.

No. 12 Houston and Oregon arrived in the desert as the favorites to play for the title. Wisconsin jumped on the Cougars early and held on late to beat them 65-63 in the semifinals. Saint Mary's made a statement against the Ducks, outclassing them in all phases for a 62-50 win.

The Badgers and Gaels played a tight title game by going to their strengths: Wisconsin pounding it inside, Saint Mary's flowing and cutting.

“At the start, we were playing a little too much one-on-one basketball,” Wahl said. “When we started to swing it, playing our game instead of their game, that's when we really started to roll.”

Brute force is a big part of their game.

The second half turned into a wrestling match as both teams turned up the defensive pressure, neither able to gain any separation.

Players repeatedly hit the floor after collisions and Wisconsin's Lorne Bowman II had to come out after being bloodied over the right eye.

Wisconsin survived all the body shots, finally getting a chance to hoist the Maui Invitational trophy — in Las Vegas.

Wisconsin may be young, but there's clearly talent on the roster. Three straight wins and a Maui title proved that.

Saint Mary's had a good run in its first Maui Invitational. A few bad plays down the stretch cost the Gaels a shot at the title.

Fotu had a strong tournament, scoring 22 against Notre Dame and 16 against Oregon. The senior forward kept it going in the first half against Wisconsin, hitting all four of his shots while scoring nine points.

Fotu found it much more difficult in the second half, taking just one shot and scoring two points.

“He had a lot to do with Fotu not scoring in the second half because he's a really good defender,” Bennett said. “He's strong, he walls up on layups. He's just tough and not going to give you anything easy.”