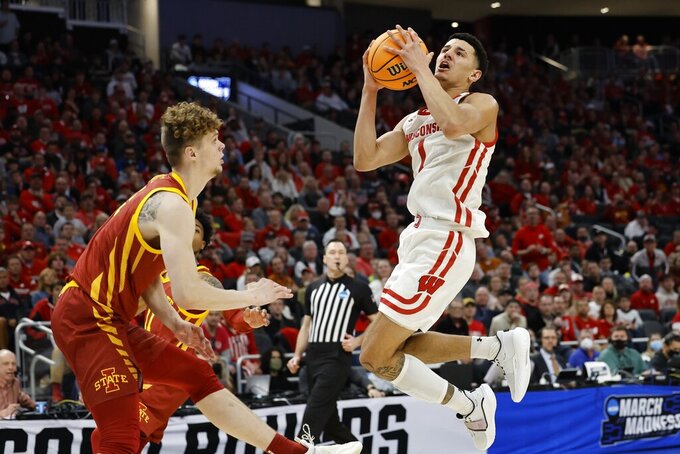 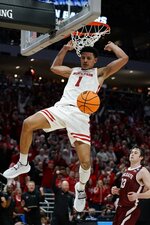 Davis announced Thursday that he’s entering the NBA draft and hiring an agent. The 6-foot-5 guard is regarded as a likely lottery selection and could be Wisconsin’s first top-10 overall pick since the Charlotte Hornets took Frank Kaminsky ninth overall in 2015.

Davis made his announcement on ESPN's “NBA Today” and later posted on social media.

"It has always been a dream of mine, as long as I can remember, to play in the NBA,” Davis said in a video he posted. He added that he “cannot wait to represent Wisconsin at the highest level.”

Davis is an Associated Press All-America first-team selection and the Big Ten player of the year. He is a finalist for the Naismith Trophy and Wooden Award, both given annually to the nation’s top player.

Davis also was one of the nation’s most improved players. After averaging 7 points, 4.1 rebounds and 24.4 minutes in a bench role as a freshman, he had 19.7 points and 8.2 rebounds per game this season while helping Wisconsin (25-8) win a share of the Big Ten regular-season title and earn a No. 3 seed in the NCAA Tournament.

Although an ankle injury knocked Davis out of Wisconsin's regular-season finale, he returned to play in the Big Ten Tournament and NCAAA Tournament.

“What he was able to accomplish during his career was phenomenal,” Wisconsin coach Greg Gard said in a statement. "Not just the stats and the championships, but as coaches, we couldn't have asked for anything more as a player, a teammate and a member of our community.

“We always knew Johnny was tough and he showed that all season long, never more than down the stretch. We knew he was hurting, but he laid it all on the line for his teammates. That's a toughness that will translate at any level.”

Davis scored Wisconsin’s last 14 points and finished with 25 in a 67-60 NCAA Tournament first-round victory over Colgate before shooting 4 of 16 and recording 17 points in a 54-49 second-round loss to Iowa State.

“It has meant absolutely everything to be able to play here at the University of Wisconsin, especially growing up in the state of Wisconsin, in the city of La Crosse,” Davis said. “Taking that jersey off for the last time hurt a lot, but I'll just know that no matter what, this will always be home for me.” ___