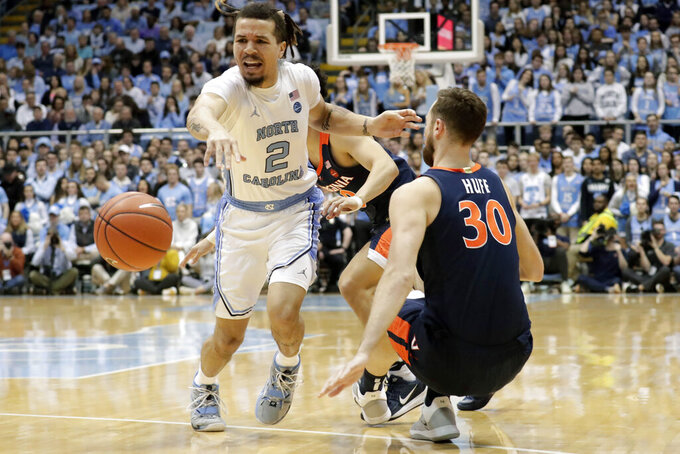 CHAPEL HILL, N.C. (AP) — Tomas Woldetensae shot himself and his team out of trouble.

Woldetensae scored 18 points and made the go-ahead 3-pointer with 0.8 seconds left to lift Virginia past North Carolina 64-62 on Saturday night.

Mamadi Diakite added 15 points for the Cavaliers (17-7, 9-5 Atlantic Coast Conference), who won for the fifth time in six games.

Woldetensae’s winning shot came after North Carolina’s Christian Keeling made three free throws to give the Tar Heels a 62-61 lead with 10.3 seconds left. Keeling had been fouled by Woldetensae while attempting a 3-point shot.

“It was such a big emotional swing, for sure,” Woldetensae said. “At first, I thought I lost it for my teammates. Then I had the chance to redeem myself.”

Casey Morsell and Kihei Clark each scored 10 points for Virginia. The Cavaliers won back-to-back games against North Carolina in Chapel Hill for the first time in program history.

“It’s always nice to get a road win, especially in a place like this with all the history,” Clark said.

The Cavaliers, who entered the game last in the ACC in 3-point shooting at 28.5%, made 9 of 21 from 3-point range. Woldetensae shot 6 for 10 from behind the arc, and Morsell made both of his 3-point tries.

Cole Anthony added 17 points for the Tar Heels, but his half-court heave at the buzzer wasn’t close. Keeling scored 11 points.

North Carolina lost despite shooting 50% from the floor against the Cavaliers, who entered the game with the nation’s top scoring defense and field-goal percentage defense.

Virginia: The Cavaliers have returned to their winning ways just in time. Virginia’s NCAA Tournament chances were fading a month ago during a three-game losing streak, but the Cavaliers have gone 6-2 while grinding out five wins by five points or fewer since then.

North Carolina: The Tar Heels remained winless in February, starting off their second month in a row with five consecutive defeats. They sit in last place in the league and are one loss away from clinching their first losing record for a regular season since 2001-02. “This is insane,” Anthony said. “I’ve never had a season like this of basketball. It’s really deflating, but our season is not over.”

Woldetensae, a junior college transfer from Italy, made at least six 3-pointers for the third time in the Cavaliers’ last six games. He has 24 3-pointers during that span after totaling 20 3-pointers through Virginia’s first 18 games.

“He’s a bit of a streaky shooter,” Virginia coach Tony Bennett said. “So when he gets his rhythm and his timing, you want to find him.”

The Tar Heels have lost five consecutive games decided by three points or fewer. That stretch includes three overtime games, and four of those losses have come at home.

“Life’s not easy,” North Carolina coach Roy Williams said. “Sometimes you’re going to be faced with a lot of adversity. But you’ve got to be able to handle it. You can’t give up.”

Anthony suffered a cut near his eye after an elbow to the face from Virginia’s Francisco Caffaro with 11:59 remaining in the second half. Anthony was called for a foul on the play and stayed down on the court before sprinting off with a towel over his bleeding face. He returned with 8:11 to play and his team trailing 47-44.

He said that trainers glued the cut and that he received no stitches.

Morsell scored all his 10 points in the second half, part of Virginia’s 17-0 advantage in points off the bench for the game. … Brooks made a free throw in the second half, snapping his streak of 15 consecutive missed free throws at home. … Armando Bacot had eight points and a season-high 16 rebounds for North Carolina.

Virginia: The Cavaliers host Boston College on Wednesday night, looking to avenge the Eagles’ 60-53 win in the teams’ first meeting on Jan. 7.

North Carolina: The Tar Heels play Monday night at Notre Dame, which they defeated 76-65 on Nov. 6 in each team’s season opener.