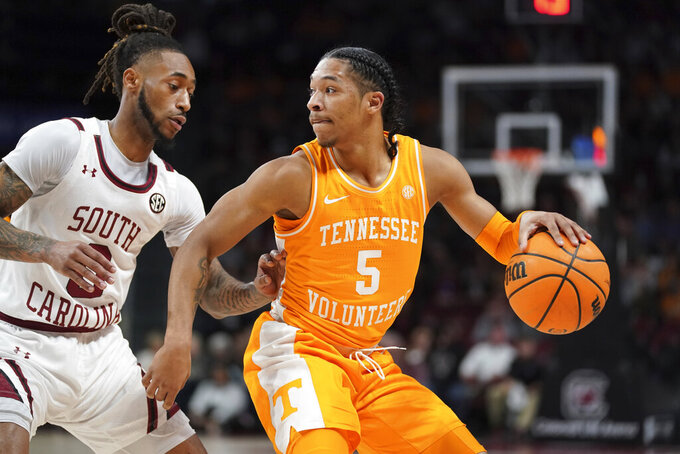 COLUMBIA, S.C. (AP) — Zakai Zeigler found his hot spot in the second half against South Carolina and No. 22 Tennessee never looked back in its latest Southeastern Conference victory.

Zeigler tied his career high with 18 points — all coming in the second half — including back-to-back 3-pointers to break open a tight game as the Vols pulled away for an 81-57 victory on Saturday, their fifth straight in SEC play.

Josiah-Jordan James finished with a career-high 20 points for the Vols (16-6, 7-3 SEC), who were up just 40-37 early in the second half when Zeigler got things going.

The freshman from Long Island, New York, connected on two 3-pointers 11 seconds apart to extend the lead. When Zeigler made a pair of foul shots two minutes later, the Vols were up 50-39 and would not be caught by South Carolina (13-9, 4-6).

Zeigler has reached double digit scoring in each of his past four games. He says it comes from work at practice, knowing where best to shoot and score. Zeigler was comfortable letting it fly the final 20 minutes against South Carolina.

“Those were my hotspots,” he said.

It didn't hurt Zeigler that he overcame a sour stomach and needed a trash can to throw up.

“He spit up on me a little,” Tennessee coach Rick Barnes said.

Zeigler said it was the first time that's happened. He quickly got back to business. “That's out of the way,” Zeigler said. “On to the next thing."

He made six of nine shots in the second half, including four 3-pointers.

Vols starting forward Olivier Nkamhoua, tied with James coming in as the team's top rebounder, left with an injury in the second half after getting seven points and five boards. He went to the locker room before returning with his left ankle taped.

Tennessee had won seven of the past eight over South Carolina, the last two including earlier this season, by 20 points. And the Vols certainly looked ready to pile up the points as they made four 3-pointers, two by James, in the first four minutes to go up 12-7.

But South Carolina, third in field goal percentage defense in the SEC, turned up the pressure to keep things tight the rest of the half.

Chico Carter's inside basket gave the Gamecocks a 28-26 lead with less than five minutes left in the half. But the Vols went on a 7-2 run to close the half, a surge started by Kennedy Chandler's uncontested dunk and closed with his foul shot for a 33-29 lead at the break.

Tennessee, third in the SEC in three-point shooting percent, made four of its first five shots from behind the arc before cooling off and going two of its last seven the final 15 minutes. The Vols ended with 14 3-pointers, the fifth time in the past seven games they've hit double-digit threes.

Devin Carter and Erik Stevenson had 13 points each to lead South Carolina.

“Our guys knew that this was, not a big game, but a big opportunity,” Gamecocks coach Frank Martin said. "When they felt it slipping away, they got deflated.”

Tennessee: The Vols found a strong mix of offense and defense to get by South Carolina. They matched the Gamecocks defensive intensity the first 25 minutes before its offense, led by Zeigler, turned up in the blowout win.

South Carolina: The Gamecocks had made a habit of rallying in the second half to win three of their past four game entering this contest. This time, Tennessee clamped down and held South Carolina to just seven field goals the final 20 minutes.

Josiah-Jordan James is from Charleston, South Carolina, about two hours Southeast of campus. He said he needed some 33 tickets for family and friends at Colonial Life Arena. Afterward, he got a bag of cookies from his grandmother. “Best homemade cookies in the world,” he said. “Shoutout, Nana."

Vols starting forward Olivier Nkamhoua, tied with James coming in as the team’s top rebounder, left with an injury in the second half after getting seven points and five boards. He went to the locker room before returning with his left ankle taped. Barnes didn't think it will be a long-term issue. "He seemed fine,” Barnes said.