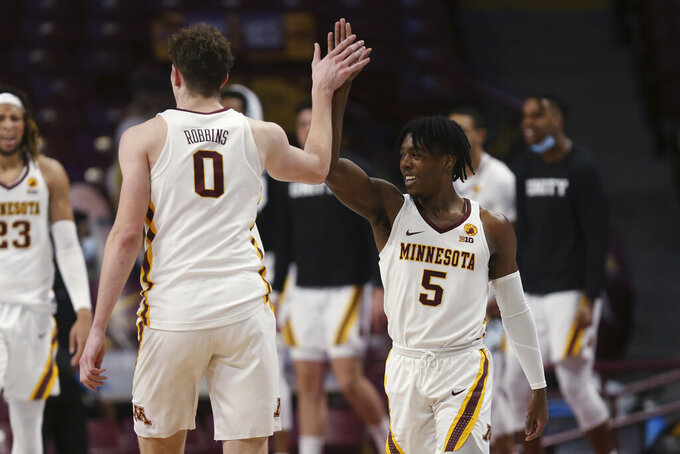 The Big Ten Conference had an astonishing nine of its teams ranked in the Top 25 in the latest poll Monday.

Naturally, the best ranked of them would immediately lose to an unranked opponent.

Maryland's victory over sixth-ranked Wisconsin on Monday night — along with No. 21 Minnesota's rout of No. 17 Michigan State — sets the stage for what could be an epic start to the new year in the improbably deep Big Ten.

Tenth-ranked Iowa, fresh off its overtime loss to the Golden Gophers, takes on No. 19 Northwestern on Tuesday night while No. 14 Purdue hosts Rutgers. Nebraska heads to No. 25 Ohio State on Wednesday, and Minnesota faces the Badgers and No. 16 Michigan tries to remain unbeaten against the Terps on New Year's Eve.

All before the weekend even begins.

The Hawkeyes continue their brutal schedule at Rutgers on Saturday, when Purdue heads to No. 15 Illinois and Michigan State visits the Cornhuskers. The weekend wraps up Sunday with Wisconsin visiting Penn State, Northwestern heading to Michigan and Ohio State traveling to Minnesota in a pair of matchups involving ranked teams.

GONZAGA GETS A BREATHER

After blowing out then-No. 16 Virginia, giving the Bulldogs a record four wins against Top 25 teams in the first seven games of a season, coach Mark Few's team finally gets a breather this week. Gonzaga ran roughshod over Northern Arizona on Monday night in the makeup of a game canceled earlier in December due to COVID-19, then turns around to face Dixie State on Tuesday night. The Bulldogs' breezy week concludes Saturday against San Francisco.

“They’re the best we’ve played so far,” Cavaliers coach Tony Bennett said, "and appear to be well-deserving of that ranking.”

Two teams that have navigated their first six games without a loss meet Wednesday night when seventh-ranked Tennessee visits No. 12 Missouri in the Southeastern Conference opener for both teams.

On Saturday, the Atlantic Coast Conference takes center stage. No. 18 Florida State plays No. 20 Duke in only the third game for the Blue Devils since Dec. 4, and No. 23 Virginia plays No. 24 Virginia Tech in a showdown of schools separated by about 150 miles of Interstate 81. The Hokies already have wins over teams that were ranked in Villanova and Clemson.

The Big Ten has the most teams in the Top 25 but the Big 12 may have the best — the league has five teams ranked in the top 13. And two of the best meet at Allen Fieldhouse on Saturday when No. 8 Texas visits third-ranked Kansas.

Second-ranked Baylor added a late tune-up against Central Arkansas on Tuesday night before traveling to Iowa State on Saturday. No. 9 West Virginia heads to Oklahoma and Oklahoma State visits No. 13 Texas Tech the same afternoon.

Fifth-ranked Houston has navigated a schedule marked by a showdown with the Red Raiders and three postponements due to COVID-19 without a loss. The Cougars should be heavy favorites against Tulsa on Tuesday night before a marque game in the American Athletic Conference against unbeaten SMU on Sunday.

No. 11 Creighton plays its first game since beating then-No. 22 Xavier on Dec. 3 when it visits Providence on Saturday.

Meanwhile, Villanova wishes it could play anybody right now. The fourth-ranked Wildcats paused their season Sunday when coach Jay Wright tested positive for COVID-19. Their game against the Musketeers on Saturday has been postponed but no decision has been made for the next three Big East games against DePaul, Marquette and Connecticut.

“Our players have been very diligent and disciplined with all of the COVID protocols,” Wright said in a statement issued by the school. “Unfortunately, we have had two staff members test positive. I am one of them. My symptoms are mild, and we remain connected as a team and staff by phone and Zoom.”