Duke's Banchero works to assert himself with "less finesse" 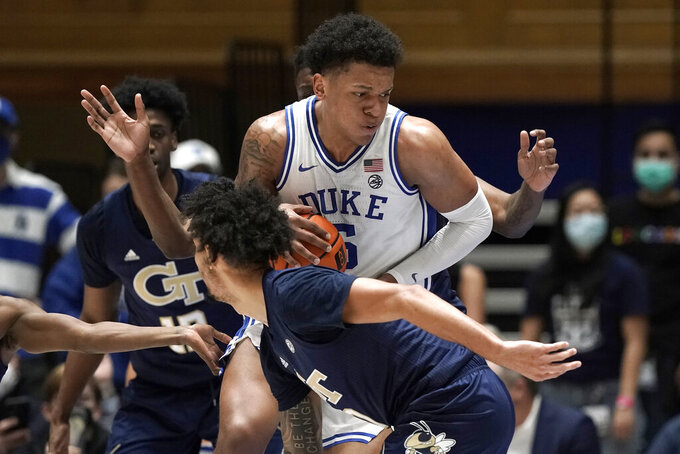 DURHAM, N.C. (AP) — Everyone knew Paolo Banchero had the size and skills to be a top NBA prospect before he ever played at No. 2 Duke. The big freshman has been working to be even better at using that combination to overmatch opponents.

Banchero has lived up to expectations as 247sports’ No. 2-ranked incoming freshman behind Gonzaga’s Chet Holmgren. He’s a reliable scorer from the perimeter and in the paint. He has the versatility to hit the boards and lead the break.

Banchero, a candidate to be the No. 1 overall draft pick if he goes the one-and-done route, views his biggest gains as "just playing stronger, less finesse.”

“That was a big thing that Coach (Mike Krzyzewski) was on me about in the preseason and early on: using my frame and imposing my will, getting to the basket, drawing fouls and just being dominant,” Banchero said after Tuesday’s win against Georgia Tech.

STRENGTHS: He has shown a reliable midrange game along with the ability to post up defenders and absorb contact in the paint. ESPN college basketball analyst Fran Fraschilla called Banchero “a modern-day Carmelo Anthony with three levels of scoring ability.”

“He won’t be the best athlete in June’s draft,” Fraschilla said, “but like Anthony, he gets to his sweet spots on the floor.”

WEAKNESSES: Banchero must get better from 3-point range (32.4%), while Fraschilla pointed to another area for improvement in his decision-making with the ball. Banchero leads Duke with 29 turnovers compared to 30 assists.

The goal now is better using his size and strength – particularly when defended by smaller players — to get to his spots, or to the foul line – where he has attempted five or more free throws in seven of 13 games.

Some other NBA prospects around the Atlantic Coast Conference:

MATTHEW CLEVELAND: The 6-7 freshman at Florida State has athleticism and length while averaging 9.9 points off the bench. He's a first-round prospect, but must develop an outside shot after starting the year 1 for 13 (8%) on 3-pointers.

CALEB LOVE: The North Carolina sophomore can play either guard position and has made significant gains entering the week, notably in scoring (15.6, up from 10.5 last year), shooting percentage (.447, up from .316) and 3-point percentage (.435, up from .266). He's a second-round prospect who could climb.

DEREON SEABRON: North Carolina State's redshirt sophomore is a name to monitor with his unexpected rise. The 6-7 wing is averaging 19.7 points and 10.1 rebounds with athleticism and the ability to attack the rim, including at least 32 points in wins vs power-conference foes.