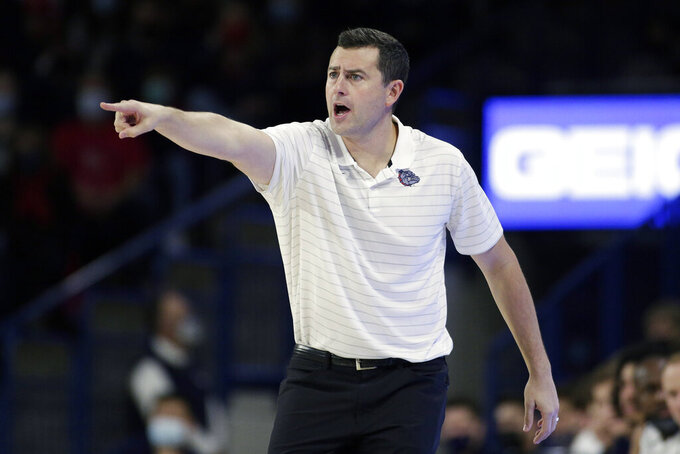 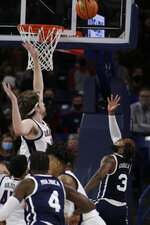 “Chet's spectacular,” said Brian Michaelson, who filled in as Gonzaga head coach for a suspended Mark Few. “He's unbelievable. He should be celebrated.

“His work ethic is out of this world. He prepares for success.”

The 7-foot freshman was a bit less loquacious.

“It's pretty cool,” Holmgren said about his debut. “I'm just happy we were able to come home with a win.”

They did it without Few on the sideline. Gonzaga's longtime head coach received a three-game ban after he was cited for DUI in September. He previously sat out the team's two exhibition games, but will be back when the Zags host No. 5 Texas on Saturday.

Rasir Bolton added 15 points for Gonzaga (1-0), which was undefeated last season before losing to Baylor in the national title game.

Player of the Year candidate Drew Timme scored 11 as the Zags played before a home crowd for the first time since the 2019-20 season.

Cameron Gooden had 15 points and Dancell Leter scored 13 to lead Dixie State (0-1), a member of the Western Athletic Conference from St. George, Utah.

Gonzaga jumped to a 14-3 lead despite making just six of its first 18 shots.

Gonzaga led 40-25 at halftime behind 11 points, nine rebounds and five blocks from Holmgren.

Brock Gilbert's 3-pointer pulled Dixie State to 47-35 early in the second. But the Zags replied with a 13-4 run, including nine points by Strawther, to take a 60-39 lead with 12 minutes left. The Zags pulled away after that.

“They picked up their defense and we turned the ball over,” Dixie State coach Jon Judkins said. “Twenty-one turnovers is way too many."

Judkins thought his squad did "some pretty good things" in the second half.

But not enough to beat the No. 1 team in the nation.

"These guys are good," Judkins said.

Gonzaga had some shooting woes in the first half, going just 2 of 13 from 3-point range. That improved to 4 for 8 in the second half. The Zags shot 54% for the game, compared to 35% for Dixie State.

Dixie State lost to Gonzaga 112-67 last season, so this was an improvement.

Gonzaga finished with nine blocks, while Dixie State had just one.

Dixie State: Still making the transition to Division I, the Trailblazers were picked to finish 12th in the WAC. They have four returning starters from a team that finished 8-13 last season.

Gonzaga: The Zags started a little rough but poured it on in the second half. Timme was a unanimous preseason AP All-America selection, and along with teammates Holmgren and Andrew Nembhard is among 50 players named to the watch list for the Naismith Trophy, given to the nation’s top player. ... Gonzaga has averaged 33 wins a season since 2015, best in the nation. The Bulldogs have won 17 straight regular-season openers dating to 2003.

Gonzaga amps up the competition Saturday, when No. 5 Texas comes to Spokane for an early-season showdown.

“It's going to be a battle,” Bolton said.