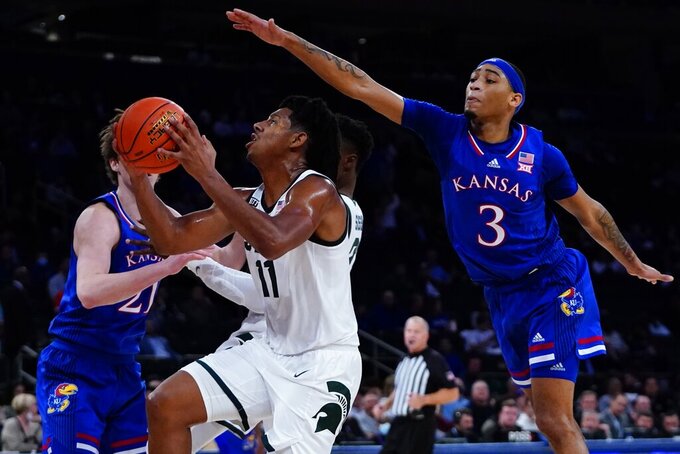 NEW YORK (AP) — Ochai Agbaji said he was close to turning pro and skipping his senior season at Kansas.

He's glad he decided to stay.

Agbaji scored a career-high 29 points and No. 3 Kansas beat Michigan State 87-74 on Tuesday night in the Champions Classic at Madison Square Garden on the opening night of college basketball.

“(I came back) for this. Be on this stage, be in this moment,” Agbaji said. “Lead my team to a win. I know my team has the utmost confidence in me. That’s why I chose to come back and do something with this season.”

Kansas' star forward said he “made the right decision, I know I did” to stay.

Remy Martin added 15 points and David McCormack had 10 for the Jayhawks, who returned four starters from last season's squad that lost to USC in the second round of the NCAA Tournament. The Jayhawks were missing forward Jalen Wilson, who was suspended last week for the first three regular-season games after he was arrested on suspicion of drunken driving last month.

Kansas led by seven at the half before Michigan State cut it to 48-45. After a timeout, Agbaji caught an alley-oop for a dunk and then stole the ball on the other end before finishing that possession with another dunk to restore the seven-point lead.

“He was terrific tonight. He’s had some big games in the past,” Kansas coach Bill Self said. “I don’t know if he’s had a bigger game on a bigger stage with the bright lights. He basically carried us. I was really happy for him and he was really good.”

The Jayhawks were up 56-48 when Michigan State coach Tom Izzo was called for a technical foul with 13:01 left. Izzo was upset when no foul was called on the previous play after Tyson Walker drove to the basket. Agbaji made both free throws from the technical foul and then hit a 3-pointer to give Kansas a 61-50 lead with 11:53 left.

Michigan State couldn't get much closer the rest of the way. A.J. Hoggard scored 17 points and Julius Marble added 13 for the Spartans, who received the most votes outside the Top 25 in the preseason poll.

“I was really happy with A.J. He pushed the ball on the break and defended pretty well. I think he took a big step forward,” Izzo said.

Kansas trailed 31-30 with 3:46 left in the half before scoring nine of the final 10 points to go up 39-32 at the break. The Spartans missed their final six field goal attempts of the half.

Zach Clemence got the run started with a layup and Bobby Pettiford's three-point play made it 37-31 — the Jayhawks' biggest lead of the half to that point. Before that, neither team built more than a three-point advantage in the back-and-forth contest.

NOT SO FREE THROWS:

“Free throw shooting, I don’t know. Me and my staff should take a lot of abuse for that,” said Izzo, whose team was only 9 for 16 from the line. "It’s something we should be able to control more than the way we shot it."

It's an early season victory for Kansas against a quality opponent, but both coaches know there's a lot of basketball ahead.

The teams have met 15 times with Kansas holding an 8-7 edge after Tuesday's win. Michigan State last won in the series in the 2015 Champions Classic that was played in Chicago. ... The Champions Classic will be extended through 2025. It started in 2011 and has always had Michigan State, Kansas, Duke and Kentucky participating. ... Michigan State will play five of its first seven games away from home, including three at the Battle 4 Atlantis. ... Walker, who transferred to Michigan State from Northeastern, where he averaged 18 points last season, was scoreless until hitting his only basket with 11:54 left. ... Agbaji's previous career-high was 26 points March 11, 2021, against Oklahoma.