Another banner, No. 1 seed on line for No. 5 Aztecs in March 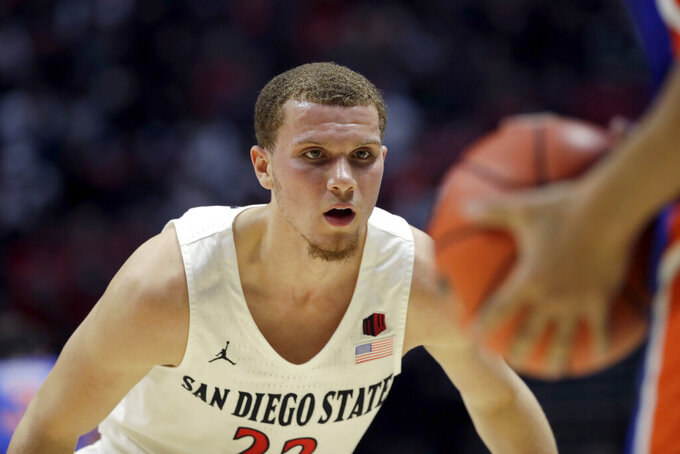 “I felt this little edge about me,” the big New Zealander said Tuesday before the No. 5 Aztecs held their first full practice for their Mountain West Conference Tournament opener on Thursday in Las Vegas, against the winner of Wednesday’s game between ninth-seeded Air Force and eighth-seeded Fresno State.

“It’s just this feeling inside of me, just I’m ready to go,” said Wetzell, who along with fellow transfers Malachi Flynn — named MWC Player of the Year on Tuesday — and KJ Feagin have lifted the Aztecs from no postseason appearance last year to the cusp of being a No. 1 seed for the first time .

“It’s the month that we’ve been all working for, for all our whole lives, almost,” said Wetzell, a graduate transfer who suffered through 20 straight losses to end last season at Vanderbilt. “For all of us, we’re all very excited to get going and get this conference tournament under way.”

For top-seeded SDSU (28-1), it will be the chance to hang another banner. They clinched the regular-season title with four games to go and then unveiled the banner prior to their only loss, 66-63 at home to UNLV on Feb. 22.

“Absolutely. It’s going to be the ultimate challenge,” said Brian Dutcher, who was named MWC Coach of the Year by his peers a day after winning the same award in voting of the media. “Obviously the upper half of the conference is playing very well right now. ... We’re looking for nothing but challenges on a neutral floor and excited to get out there.”

The Aztecs and their fans have been looking forward to March since early in this historic season. They won at No. 15 BYU and then beat No. 11 Creighton and No. 18 Iowa on consecutive nights to win a tournament in Las Vegas.

They went 27-0 and were the nation’s last unbeaten team before losing to UNLV.

They’re projected as the No. 1 seed in the East, where the regionals will be played at New York’s Madison Square Garden.

“I think we have to probably win a game or two to be a No. 1 seed,” Dutcher said. “I don’t know if we have to win all of them. A lot of that depends on how everyone else does. But we want to play our best basketball, regardless. We don’t want to go there and take a step back. I tell the guys every day, ‘You either get better or you get worse. We have to get better leading into the conference tournament and obviously into the NCAA Tournament.

“I think the No. 1 seed obviously has been proven over the years to give you the best chance to advance,” said Dutcher, in his third season as head coach after serving as Steve Fisher’s top assistant for 18 seasons. “A No. 1 seed would be nice in order to try to advance. But as much as the seeding is, sometimes you just have to get the right draw. You have to get matchups that are suitable for your team. Someone who doesn’t play strong where you’re weak. Obviously, I’m not going to discuss what those weaknesses are. I have a feeling we have a few but I’m not looking to put them out there for everyone to know.”

One of the recent weaknesses is getting off to a slow start defensively. They rallied from a two-point halftime deficit in their last home game to beat Colorado State 66-60 on Feb. 25, and from a 13-point deficit at Nevada on Saturday before winning 83-76.

Dutcher and Aztecs fans would prefer to be in the West in the NCAA Tournament. Second-ranked Gonzaga is projected as the No. 1 seed in the West, where the regionals will be played at Staples Center in Los Angeles.

Dutcher said the Aztecs don’t schedule games in the East in the regular season. “I would choose not to fly three time zones to play a college basketball game,” he said.

“But we don’t have that choice. All we can control is how we play and then the committee will send us where they want to send us. Ideally, you want to stay West. The dream scenario would be the No. 1 seed in the West. Can it happen? Yeah. Will it happen? I have no idea.”

Flynn, a junior transfer from Washington State, also was named Defensive Player of the Year.

He said being named the Player of the Year was “a testament to everything the team has done.”

He said Feagin should have been named the Defensive Player of the Year. “A lot of things KJ does goes unseen in a lot of people’s eyes. We know how much he’s valued, especially on that end of the floor,” Flynn said.

Dutcher said Flynn “has the ability to score when we need it but yet run the team. His ability to pick and chose when he has to turn his offense up as opposed to getting his teammates involved is really a hard thing to do and he makes it look easy and effortless.”