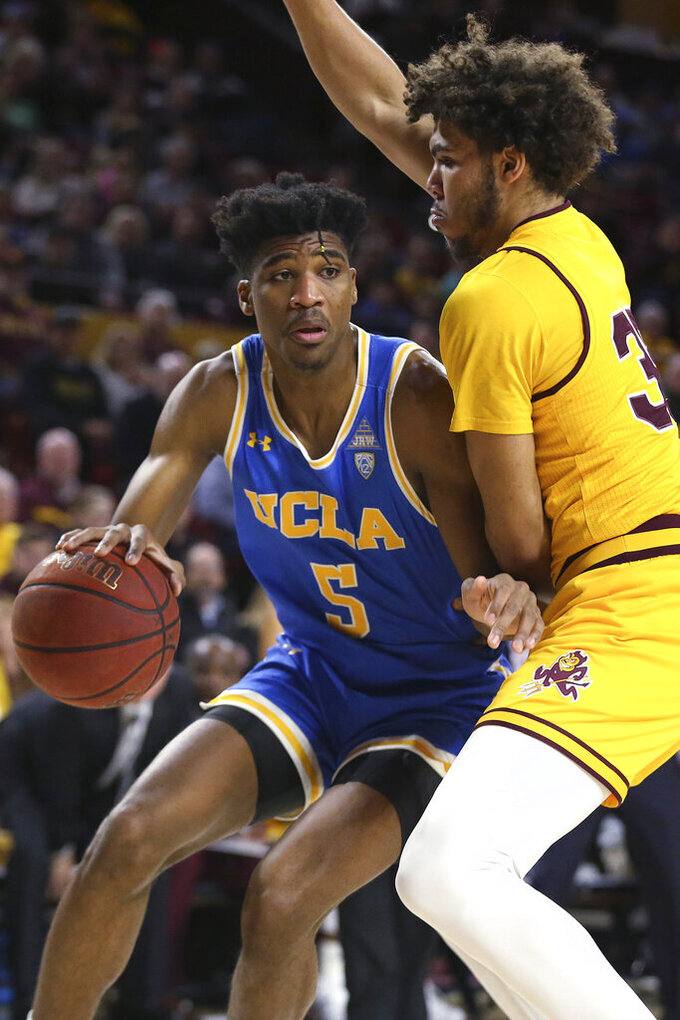 UCLA's Chris Smith (5) looks for an opening while being covered by Arizona State's Tahshon Cherry (35) during the first half of an NCAA college basketball game Thursday, Feb. 6, 2020, in Tempe, Ariz. (AP Photo/Darryl Webb)

TEMPE, Ariz. (AP) — Down one of its best big men, UCLA threw double teams at Romello White all night.

Arizona State's big man did a good job of kicking it out to his teammates on the perimeter for open shots.

And the Pac-12's worst 3-point shooting team made them. Lots of them.

“It was just a matter of time,” Verge said. “Everybody just bought into what we were trying to do, just moving the ball.”

The Sun Devils found the range against UCLA, shooting the Bruins out of the gym by making 14 of 24 from 3. Verge, Kimani Lawrence and Khalid Thomas all went 3 for 3 from the arc.

Martin was the cog making Arizona State's offense click, finishing with seven assists. White had 16 rebounds, eight points and all those effective kickouts.

“Top to bottom, both ends of the floor it was probably one of our more complete games,” Arizona State coach Bobby Hurley said.

UCLA (12-11, 5-5) labored without top rebounder and second-leading scorer Jalen Hill, who sprained his right knee in practice this week.

The Bruins couldn't stop Sun Devils from the perimeter and couldn't get their shots to fall, either, finishing 7 of 25 from the 3-point arc.

Cody Riley had 16 points and Tyger Campbell 13 to lead UCLA.

“Obviously they shot the ball very well, but a lot of it was our transition defense,” Campbell said. “We didn't get back and that's a big thing for us."

The Bruins and Sun Devils have been inconsistent this season, but playing better lately to stay in the thick of the Pac-12 race.

UCLA arrived in the desert with four wins in five games, including a four-point win over then-No. 20 Colorado.

The Sun Devils rallied from 22 points down to beat rival Arizona and entered Thursday's game with three wins in four games.

UFC ring announcer Bruce Buffer was on-hand to introduce the Sun Devils and it seemed to hype both team, who combined to hit nine of 14 shots by the first media timeouts.

The Sun Devils kept making shots. The Bruins did not.

The Sun Devils stretched the lead to 16 in the opening five minutes of the second half and kept making 3s to give the Bruins no shot at the comeback despite making a few 3s late.

“I feel like we had a lot of good looks, they just weren't falling,” Campbell said. “Hopefully they'll fall next game.”

UCLA's run of quality games ended with a clunker in the desert.

Arizona State had one of its best all-around games of the season and showed how dangerous it can be when the outside shots are falling.

UCLA plays at No. 23 Arizona on Saturday.