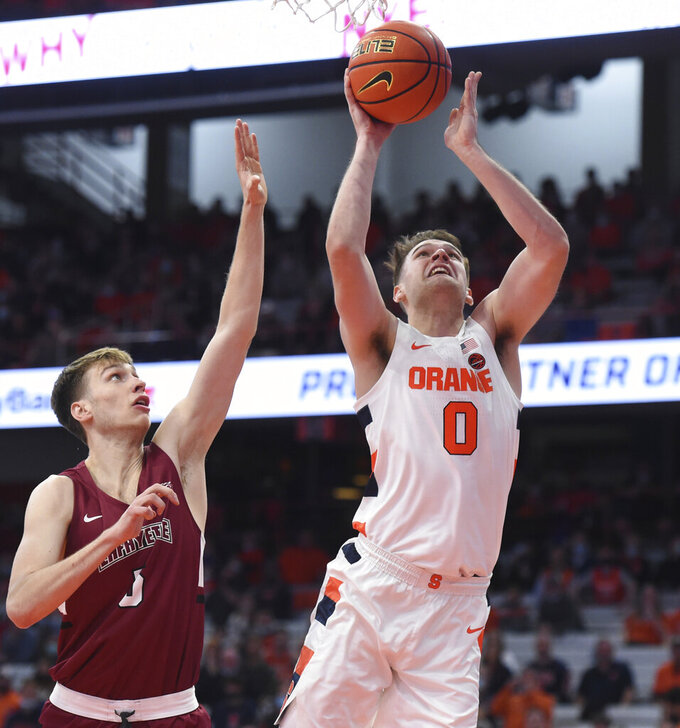 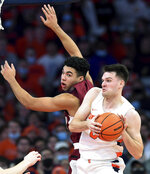 SYRACUSE, N.Y. (AP) — Jim Boeheim was a very happy father after the first game of his 46th year as head coach at Syracuse.

Sons Jimmy and Buddy each scored 18 points on Tuesday night, leading the Orange past Lafayette 97-63.

It was Jimmy's debut after transferring from Cornell, where he played for three years before last season was lost when the Ivy League canceled because of COVID-19.

“He had a real good night tonight,” coach Boeheim said of his oldest son. “I'm really happy for him.”

Joe Girard led Syracuse with 20 points, making all five of his 3-point attempts. Cole Swider, a transfer from Villanova, debuted with a double-double with 12 rebounds to go with 14 points.

It didn't take long for Jimmy to feel at home in the Carrier Dome playing alongside Buddy for the first time since high school. Jimmy had the first four baskets for Syracuse before Buddy, in his 90th game with the Orange and their leading scorer last season, added a 3-pointer for an 11-4 lead.

“It's really special,” Jimmy said. “Every day is a blessing being out there with family and extended family. This whole team, I think we're a family in our own way. You couldn't ask for anything more. I just feel really blessed.”

Midway through the first half Syracuse led 25-4 with the Boeheims combining for 19 points.

“When you’re the new kid on the block, you want to prove yourself,” mom Juli said. “I was so overjoyed the way the game started. For me, it is surreal, off the charts."

The Boeheim brothers teamed for 28 points by halftime when Syracuse led 52-30.

“Just trying to be confident out there and let the game come to me, just playing the game I love,” Jimmy said. “It felt great. I just had a lot of fun out there. It was my first game in over 600 days, so I'm sure you could tell I was itching to get back out there. This is what I've been itching for for about two years now."

The Orange shot over 50% in each half and finished at 50% from the arc (13 of 26) while Jim Boeheim’s vaunted 2-3 zone defense held the Leopards, who had four of five starters returning, to 34%.

Kyle Jenkins and Leo O’Boyle had 14 points each for Lafayette, which made 12 of 41 3-point attempts.

It was the ninth meeting between the teams and first since the mid-1990s, and the Orange have won them all.

Lafayette: The Leopards went 9-6 last season, playing only against Patriot League foes because of the coronavirus. That was good enough for first place in the Central Division, but the Leopards lost nearly half of their scoring from last year.

Syracuse: The Orange received a handful of votes in the AP Preseason poll, but they won't be tested until later this month at the Battle 4 Atlantis. The field includes Arizona State, Auburn, Loyola Chicago, Michigan State, VCU, Connecticut, Virginia Commonwealth, and Baylor.

Lafayette hosts Cornell on Friday night but will play five of its first six contests away from the friendly confines of Kirby Sports Center. Three of the five road opponents are Power Five foes and also include No. 9 Duke and Rutgers.