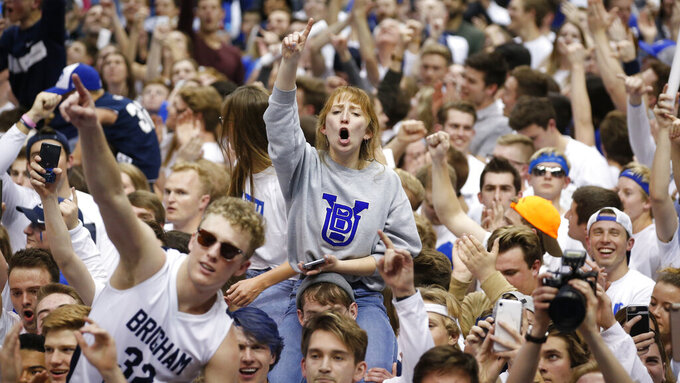 BYU might just have gone from the most precarious of positions on the NCAA Tournament bubble to a near-lock in one memorable night, thanks to one spectacular performance against second-ranked Gonzaga.

The Cougars (23-7) were trending in the right direction anyway, winning seven straight heading into their match-up with the Bulldogs. But the show they put on in a 91-78 victory Saturday night, long after folks on the East Coast probably went to bed, was exactly the kind of game BYU coach Mark Pope had been hoping to see as March drew near.

“I’m super happy. It just doesn’t happen like this,” he said. "They just kind of dug in and kept battling for four years or five years or six years. Then they set the table with a summer that was really demanding and difficult. Waking up every single morning and fighting their own agenda so that they could sacrifice for this team. A lot of times you do all that stuff and you don’t get that senior night, but these guys did and it’s extraordinary and I am so happy for them.

“It’s actually really humbling,” Pope added, “because it just doesn’t work like this a lot, but it worked for this crew. I hope that all 18,000 of us in there and everybody that watched it on TV got to see something they’ll never forget.”

Now, the question isn't whether the the Cougars will get into the tournament but where they will be seeded. They have one more regular-season game left against Pepperdine before the West Coast Conference Tournament, where they could face the Zags in a rubber match — the Bulldogs had beaten them at home earlier this season.

“When you experience those lows," BYU guard T.J. Haws said, "winning is that much sweeter. This team has been through a lot this year but what I love about us is that we continue to fight. Adversity comes our way and the next day we’re at practice ready to fight. When you have a team that works so hard, moments like this happen.”

On a related note, the loss by Gonzaga could put its No. 1 seeding in jeopardy. But losses by top-ranked Baylor and No. 4 San Diego State helped its cause, and the Bulldogs still have some of the best advanced metrics in the country.

Virginia (19-7, 11-5 ACC). The reigning national champions were an afterthought a month ago, but wins over Boston College and Pittsburgh last week have continued a hot streak stretching to four games. And with games down the stretch against Louisville and Duke, there are plenty of chances of the Cavaliers to become a lock.

Michigan (18-9, 9-7 Big Ten). Has any team gone on a bigger roller coaster this season than the Wolverines? They shot up the polls with a brilliant start, went through a mid-season swoon, and now have won five in a row to get back in the picture for an at-large bid.

Utah State (22-7, 11-5 Mountain West). The Aggies are poised to make the Mountain West more than just a one-bid league regardless of what happens with San Diego State in the conference tournament. They've ripped off five straight wins and behind Sam Merrill's continued offensive brilliance.

UCLA (17-11, 10-5 Pac-12). There are a whole bunch of bubble teams in the league — we see you, Southern California and Stanford. But the Bruins have come alive under Mick Cronin, winning five straight to make a strong at-large case.

North Carolina State (17-10, 8-8 ACC). There is no shame in a competitive loss to Florida State, but the Wolfpack now have dropped five of their last eight games. Duke is also on the schedule during their final four-game stretch.

Marquette (17-9, 7-7 Big East). The Golden Eagles have been a mainstay in the Top 25 most of the season, and they have one of the nation's most exciting players in Markus Howard. But three straight losses have put them on the NCAA Tournament bubble, and tough games against Georgetown and No. 16 Seton Hall loom.

Oklahoma (16-11, 6-8 Big 12). The Sooners have dropped three straight, and while losses to Baylor and Kansas are hardly a black eye, a lopsided loss to Oklahoma State was especially damaging.

South Carolina (16-11, 8-6 SEC). The Gamecocks' postseason hopes took a big blow last week with losses to Mississippi State and LSU. They'll get the Bulldogs again during a four-game finishing kick in which they should be favored to win out.