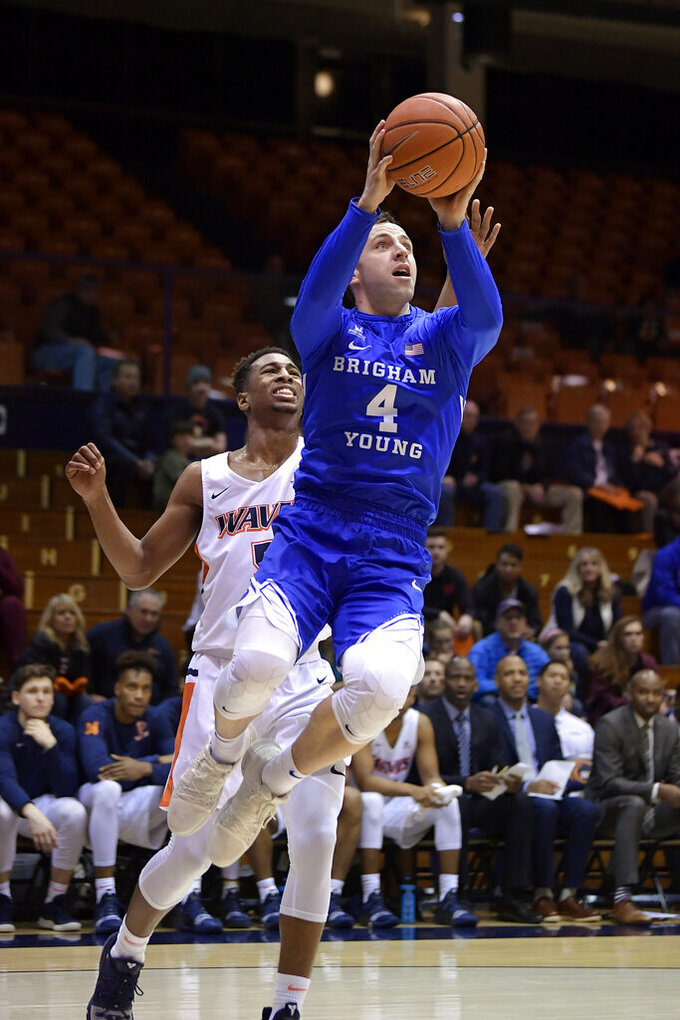 FILE - In this Jan. 17, 2019, file photo, BYU guard Nick Emery, right, shoots as Pepperdine guard Jade' Smith defends during the first half of an NCAA college basketball game, in Malibu, Calif. BYU guard Nick Emery said Tuesday, July 23, 2019, he is retiring from basketball following a college career that began with high expectations but that ended with him at the center of an NCAA investigation. Emery used social media to announce he is stepping away with a year of eligibility still remaining.(AP Photo/Mark J. Terrill, File)

PROVO, Utah (AP) — BYU guard Nick Emery said Tuesday he is retiring from basketball following a college career that began with high expectations but that ended with him at the center of an NCAA investigation.

Emery used social media to announce he is stepping away with a year of eligibility still remaining.

"My time here has been rocky at times, but the good times definitely outweighed the bad," Emery wrote in an Instagram post also shared to his Twitter account. "I've learned so many life lessons and this journey has been so rewarding. I am at a point in life where I am happy with what I've accomplished with basketball and I'm ready to start the next chapter of my life with my wife and son."

The school confirmed the retirement.

"We are excited for Nick as he begins this next stage of his life," BYU head coach Mark Pope said in a news release. "He has great things ahead."

Emery made a splash right away at BYU, averaging a career-best 16.3 points per game during his first season and setting a BYU freshman record with 97 3-pointers. He helped the Cougars reach the semifinals of the 2016 NIT.

After playing for two years, he withdrew from school for the 2017-18 season, citing personal reasons. The 6-foot-2 guard returned to the program in 2018 and he began his third and final season serving a nine-game suspension following the NCAA investigation.

The NCAA last year placed the men's basketball program on probation for two years and said it must vacate 47 wins from Emery's freshman and sophomore seasons.

The NCAA said Emery received more than $12,000 in benefits from four boosters, including travel to concerts and an amusement park and the use of a new car. The NCAA also accepted the university's self-imposed penalties of reducing one scholarship, disassociation of one of its boosters and a $5,000 fine. The NCAA didn't identify Emery by name but the university said the case involved him.

Emery averaged 12.6 points, 2.9 rebounds, 2.3 assists and 1.4 steals per game over his three seasons with the Cougars.

With grad transfer Jake Toolson joining BYU from Utah Valley for the upcoming season, Emery's role with the Cougars would likely have been greatly reduced this fall. Toolson earned WAC Player of the Year honors as a junior after averaging 15.7 points, 4.5 rebounds, and 2.3 assists for Utah Valley.