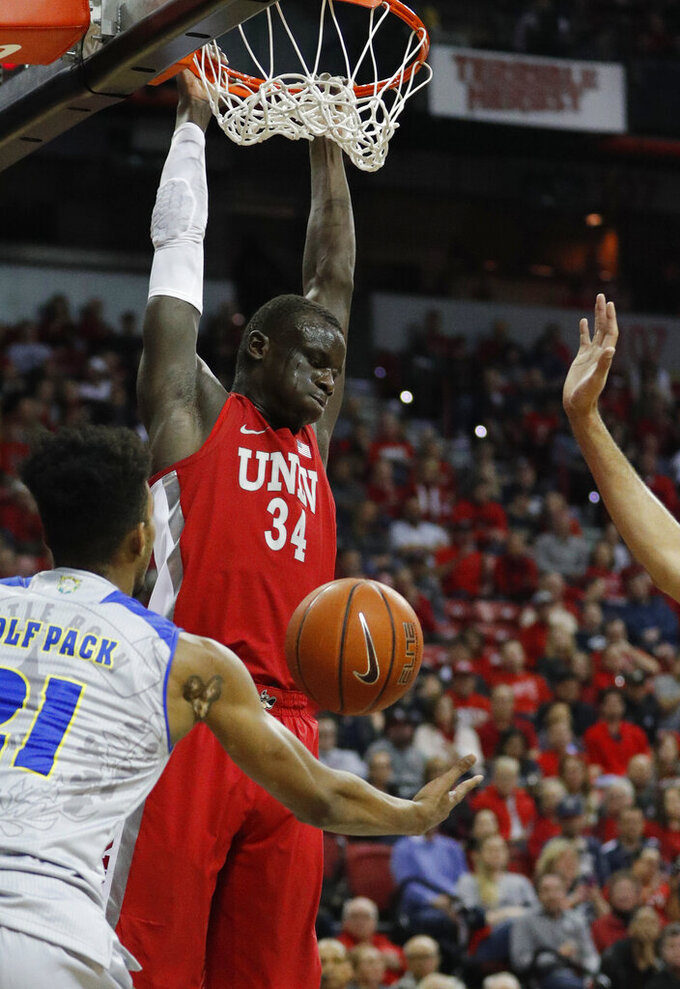 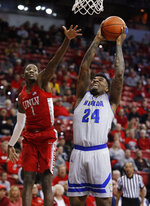 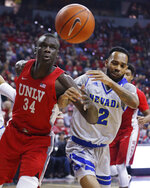 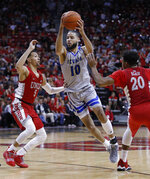 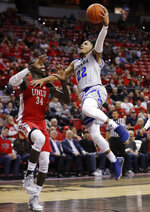 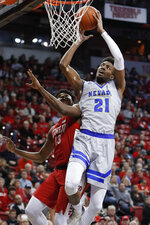 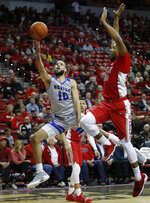 LAS VEGAS (AP) — Nevada has dropped one game all season, and it didn't take that setback too well.

Since losing at New Mexico on Jan. 5, the eighth-ranked Wolf Pack have won six straight — five by double digits — after Caleb Martin had 26 points and six rebounds Tuesday night in an 87-70 victory over UNLV.

Nevada (20-1, 7-1 Mountain West) has outscored opponents by an average of 20.3 points during the streak.

"We were really disappointed with the one loss that we've had this year," coach Eric Musselman said. "It's hard to play really well every night and we had a game that we stunk, but I think it refocused us for sure."

Jordan Caroline added 18 points and 10 rebounds for Nevada, his 12th double-double of the season. Cody Martin chipped in with 10 points, seven assists and six rebounds.

"There was added pressure on this game because it means so much to this state, the big rivalry game, so we knew it would have a lot more influence on how they would play and how they would come out and the energy in this building alone," Caroline said. "We were so locked in and keyed in defensively. We knew what we needed to do going into this, and we really were just locked in all week at the task at hand."

Nevada, which turned 14 UNLV turnovers into 14 points and outscored the Rebels 15-10 in fast-break points, used a first-half shooting spree to put the game away early, dominating inside and having its way with its archrival. The Wolf Pack opened a 13-6 lead and extended the spread to 12 after completing a 9-2 run midway through the half.

"It's big for us to take the crowd out early," Caleb Martin said. "Whether people believe it or not, or whether the crowd believes it or not, their energy translates to the court."

And while the Wolf Pack were pulling away in the opening period, the Runnin' Rebels never found a rhythm, forcing shots from the perimeter and making desperate drives into the paint. Some shots fell, but most didn't, as UNLV looked beleaguered against Nevada's bigger lineup.

The Rebels went 10 for 33 from the field, including an abysmal 0 for 12 from 3-point range, while falling behind by 22 at halftime.

With first place in the conference at stake, Caleb Martin thought it was equally important to maintain that momentum in the second half of an intense rivalry game, knowing how dangerous UNLV can be on offense.

"You've got to think you have a clear slate and you've got to come out with a 0-0 mentality," he said. "We can't look up at the scoreboard and think about being up by 15 or think you're up anything. You just want to come out and make sure you have the same effect from the jump."

Nevada was equally hot in the second half, shooting 47.6 percent from the field.

"To come on the road and to be able to win by double digits, really proud of our defensive effort," Musselman said. "They're a really good offensive team. They can shoot the 3 and I thought from a defensive standpoint we played as good as we're going to play."

UNLV announced a season-high attendance of 15,786.

Nevada: Caroline is averaging 18.7 points and 9.7 rebounds per game. He has 39 double-doubles in his Nevada career, fourth in school history. The Wolf Pack are 37-2 when he posts a double-double.

UNLV: The Runnin' Rebels struggled to get much from their reserves, as Nevada outscored UNLV 19-14 off the bench. UNLV's backups were 4 for 10 from the field, a huge factor once Ntambwe and Jonathan Tchamwa Tchatchoua picked up their fourth fouls.

Nevada: The Wolf Pack look to avoid a hangover after this blowout win when they host Boise State on Saturday. The Broncos will be seeking revenge after Nevada escaped Boise with a one-point victory in the first meeting on Jan. 15.

UNLV: Plays at Utah State on Saturday. UNLV is 3-5 away from home, including 2-3 in true road games.