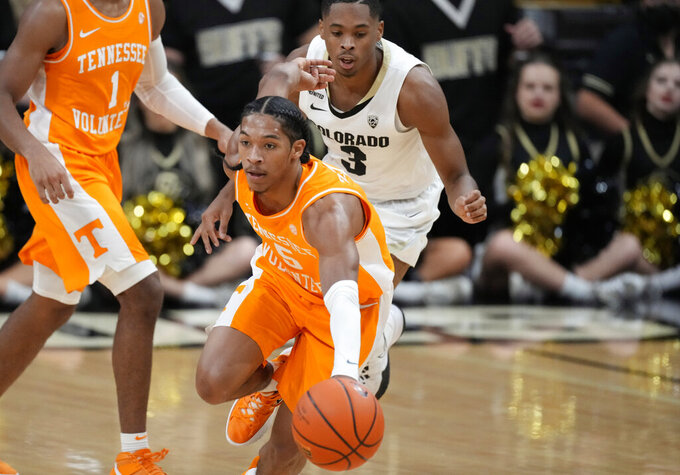 BOULDER, Colo. (AP) — Freshman Kennedy Chandler scored 16 of his season-high 28 points in the first half and No. 13 Tennessee pulled away from Colorado 69-54 on Saturday.

It was Tennessee’s second straight victory over the Buffaloes in as many years. The Volunteers topped Colorado 56-47 at home in the opener for both teams last season.

“Tonight they had Kennedy Chandler and we didn’t,” Buffaloes coach Tad Boyle said. “He was the difference in the game.”

Tennessee (6-1) overcame a slow start to win its third straight since an 18-point loss to No. 6 Villanova. Santiago Vescovi had 13 points for the Volunteers.

Before Saturday, Tennessee’s only road games since Jan. 25, 2020, were in SEC play, and it had not won a non-conference road game since Dec. 15, 2018, at Memphis. The Volunteers were ready for a tough environment Saturday but fell behind 8-0 right away.

“We knew they were going to come out with a lot of emotion, playing at home against a ranked team,” coach Rick Barnes said.

Evan Battey had 12 points and Tristan Da Silva scored 11 for the Buffaloes (6-3).

Colorado scored the first five points of the second half to get within five but the Volunteers went on a 10-4 run. The Buffaloes got within five again with 8:34 left but Tennessee scored the next eight points.

Chandler hit key baskets to make sure the Colorado didn’t get closer than five.

“We tried everything, going under (screens), switching, we just did a bad job,” Battey said of guarding Chandler.

The Buffaloes led 17-16 with 8:58 left in the first half but then struggled on the offensive end. They went 1 of 7 from the field and had eight of their first-half turnovers the rest of the way.

Chandler took over late in the first half to help Tennessee pull away. He scored eight of his 16 points in the final two minutes to turn a 26-22 lead into a 10-point advantage at intermission.

“Were just we were playing off the game,” Chandler said. “We had to get some stops first. And that’s what leads the offense. That’s what we did.”

Josiah-Jordan James returned after missing the last two games with an injury to his left hand and scored five points. He suffered a dislocated finger in the loss to Villanova and wasn’t sure when he would get back. Barnes said he practiced in Knoxville on Thursday and again Friday.

He also had nine rebounds and four of the team’s eight blocks.

“Josiah James I thought was a difference in the game,” Barnes said. “I thought what he did on both ends of the court was huge for us.”

“That’s high praise, but I wouldn’t say that. I think as a collective unit,” he said.

The Volunteers acknowledged they felt the higher altitude in Boulder but Barnes told his team he thought the Buffaloes were bothered by it as well.

“We didn’t realize it but he said Colorado look tired at halftime,” Chandler said. “We took advantage of that.”

Tennessee: The Volunteers will hold onto its poll position and could move up. A breakout game for Chandler is a positive for Tennessee. The freshman has scored in double figures in all but one game this season.

Colorado: Lost another tough one to a ranked opponent this week. The Buffaloes hung tough with UCLA and had a chance in this one until the Volunteers pulled away. The turnovers in the first half hurt and 15 overall were too much against a ranked team.