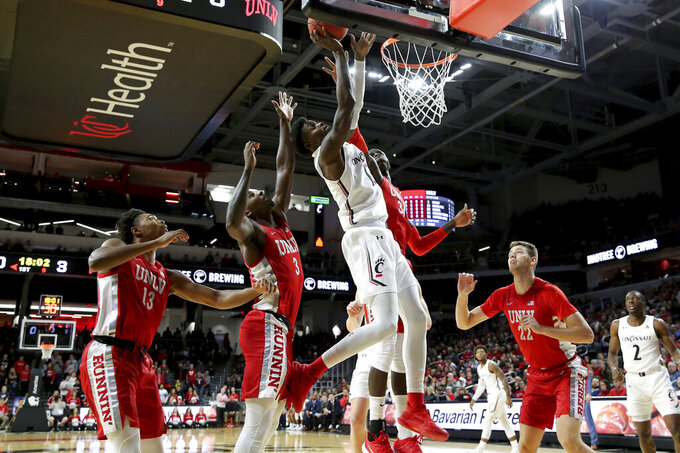 Cincinnati forward Trevon Scott (13) pulls down a rebound next to UNLV forward Cheikh Mbacke Diong (34) in the first half of an NCAA college basketball game Saturday, Nov. 30, 2019, in Cincinnati. (Kareem Elgazzar/The Cincinnati Enquirer via AP) 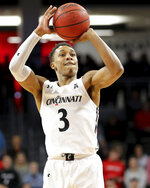 CINCINNATI (AP) — Jarron Cumberland made 12-of-17 free throws to score 20 points and Cincinnati staged a second-half rally to beat UNLV 72-65 in overtime on Saturday.

The Rebels lead 33-24 at intermission before Cincinnati (5-2) got back in it and eventually led 58-48 with 70 seconds remaining in regulation. UNLV’s Amauri Hardy and Elijah Mitrou-Long made back to 3-pointers to cut the deficit to four.

After Cumberland sank a pair of free throws to make it 60-54 with 31 seconds to go, Mika Adams-Woods fouled Mitrou-Long on his 3-point attempt with 23 seconds left. Mitrou-Long sank three foul shots to reduce the deficit to three. Following a Cincinnati timeout, Jaevin Cumberland turned it over to give the Rebels a chance.

Donnie Tillman missed a 3 with six seconds left, but Bryce Hamilton came up with the offensive rebound to set up Mitrou-Long, who buried a 3 with 1.3 seconds left to force overtime. The Rebels (3-6) led just once in the extra session.