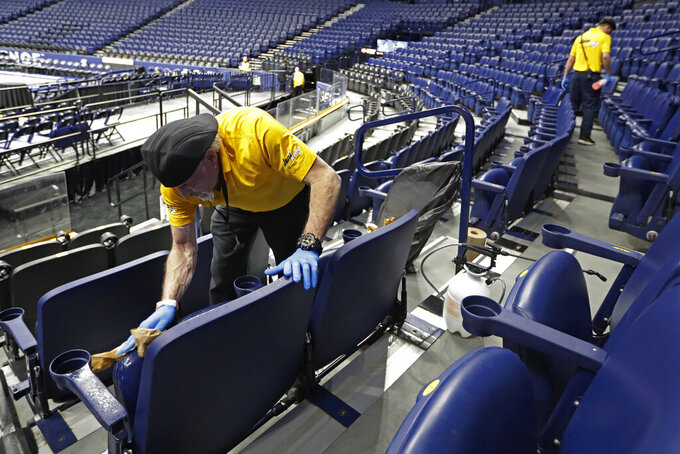 Mount St. Mary’s earned its sixth bid to the NCAA Tournament on Tuesday night by beating Bryant in the Northeast Conference Championship game, setting off a postgame celebration that included joy, anticipation, hugs -- and COVID-19 testing.

Before the Mountaineers made the 7 1/2-hour bus trip from Smithfield, Rhode Island, back to Emmitsburg, Maryland, they were tested again Wednesday morning.

“Even last night as we were celebrating, we were on the court and I was reminding guys, ‘Hey, put your mask on,‘” Mount St. Mary’s director of basketball operations Jeremy Freeman said during that long bus ride back. “You don’t want the celebration of a championship to not let you get into Indy.”

The Mountaineers and 67 other teams will be playing in an NCAA Tournament like no other. Instead of the event being scattered throughout arenas from coast to coast, every game will be played in Indiana, all but a handful in Indianapolis, and with attendance sharply limited. A similar arrangement is in place for the women’s tournament in and around San Antonio in South Texas.

A year after the tournament was canceled before it began because of the pandemic, a devastating blow financially and emotionally to everyone involved in college sports, the NCAA is determined to keep the coronavirus from being a bracket buster over three careful, hopeful weeks.

Postponements and rescheduling are not the options they were during the regular season. Duke became a cautionary tale Thursday when it was forced to withdraw from the Atlantic Coast Conference Tournament after a positive virus test.

“We said from the beginning that the challenge with the tournament versus the regular season is once you get started, it’s hard to pause,” said Dan Gavitt, the NCAA’s senior vice president of basketball. “And so the plan is put all the work in on the front end and make sure everybody’s healthy, safe and eligible so the games can go off as scheduled and we can keep the tournament going forward.”

To play 67 games over three weeks in Indiana, the NCAA is taking over four hotels, five arenas, one NFL stadium and an entire convention center. Teams will be mostly shielded from the general public, including friends and family, from the time they get on buses and planes that will take them to Indianapolis until they are either eliminated or win the whole thing on April 5 at Lucas Oil Stadium.

As long as they play they will operate under strict protocols and tight schedules.

Everybody gets a single hotel room. Every team gets its own floor in a hotel and space at the convention center. For guidance, Gavitt said the NCAA turned to professional leagues such as the NBA and NHL, which successfully staged limited site playoffs last year.

Just don’t call it a bubble.

Each member of a team’s 34-person travel party — down from 75 — must complete seven negative COVID-19 tests before leaving for Indianapolis. At least one of those seven tests must be a PCR test, considered the most accurate.

Mount St. Mary’s started its testing Saturday, just in case it earned a bid, and is one of 10 teams expected to arrive in Indianapolis on Saturday. The 17 teams that are scheduled to lock up spots in conference tournaments this weekend are due in Sunday. The rest of the field needs to be in town by Monday with the First Four games set for next Thursday and the first round tipping off the next day.

The NCAA usually pays for teams to travel to tournament sites by charter bus or plane. This year, those arrangements include socially distanced seating plans that have been approved by public health officials in Indiana and personal protective equipment such as N95 masks and goggles to be worn during the trip.

There will be no food or beverage services on planes. Bus drivers will be tested for COVID-19.

“Because you don’t want there to be a potential contact traceable event on the plane,” said Dr. Brian Hainline, the NCAA’s chief medical officer.

Upon arrival in Indianapolis, players, coaches and other team personnel will be tested for COVID-19 and then expected to quarantine until that test result is returned. Then they will be tested again, and returned to quarantine until that result is back. Players will wear devices that track who they have been in close proximity with to aid contact tracing — which everyone is hoping won't be necessary.

Daily tests will continue throughout the tournament. Those who have been vaccinated for COVID-19 will still be tested, Hainline said. Those who have tested positive previously are exempt from surveillance testing for 90 days after their positive test, which is in line with CDC guidance.

Hainline said testing not only provides valuable virus surveillance, it is a tone-setter for the event. As has been the case throughout the pandemic, individual behavior and adhering to protocols will ultimately determine success.

“I think it’s taken to an entirely different level now that there just cannot be any lapse in terms of physical distancing and masking other than when you’re on the court or when you’re actively in practice and competition,” Hainline said.

Logistically, the first week will be by far the most challenging. When the second round is completed on March 22, the field will be down to 16 teams and they will all be moved to one hotel. They will be able to stretch out at the convention center as meeting rooms will be expanded, but the vigilance will continue.

Team hotels are connected to the convention center in Indianapolis by skyways that will be closed to the public. Teams will be escorted to the convention center where 12 practice courts have been set up, along with meeting rooms equipped for film sessions. Next week, practices will run from 9 a.m. until 10 p.m. and the schedule is rigid. Normally, teams would be permitted to arrange some of their own practices at local high schools or colleges. Not this year.

“So it’s the same for everybody, but there’s not any flexibility in that first week,” Gavitt said.

Players can expect to have video games available in their rooms to fill down time, along with some other swag that will keep them busy “both intellectually and the fun stuff,” Gavitt said.

Players can mix in lobbies and common spaces, but they will be encouraged to do so masked and properly spaced out. Opportunities to get outside as a group, weather permitting, will be coordinated by the NCAA. Team meals will be held at hotels, with predetermined seating arrangements. If anybody needs a late-night snack, they can order takeout through an NCAA ambassador assigned to each team.

Players themselves will not be on lockdown at their hotels. There won’t be guards on every floor or security cameras monitoring exits and hallways.

But there will be security in hotel lobbies and other venues to keep unauthorized visitors away.

“We also know we have fans and family members and others that would love to interact with those student-athletes and coaches,” Gavitt said. “And if we’re going to be successful, that’s not going to work until a team is either a champion or has lost and gone home.”

Once the bracket is released Sunday night, teams will not be reseeded. Replacement teams are a possibility if needed only within 48 hours of the announcement: After 6 p.m. Tuesday, teams that make the field cannot be replaced if a player gets sick. Their opponents simply advances in the bracket, though Gavitt acknowledged Wednesday that as long as a team has five players available, it can play as long as it keeps winning.

“We decided if they had five players eligible and healthy,” they could play," he said. “We wrestled with contingencies, and thought it was fairest for a team that earned its way, that even if it was compromised, they should have the opportunity to play rather than be replaced.”

There will be no bands or cheerleaders at this year’s games, though there will be fans. Overall attendance for each venue will be capped at 25%, but Gavitt said at the smaller venues it probably won't even get that high because of social distancing and pod seating.

“Although this year’s championships may be different," said Joni Comstock, the NCAA’s senior VP of championships, "we are committed to providing a memorable once-in-a-lifetime experience for all student-athletes.”