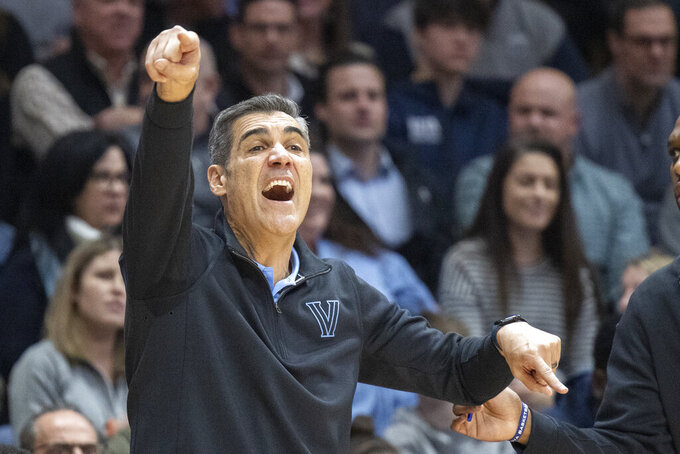 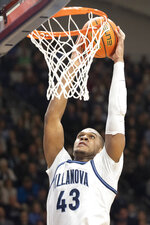 VILLANOVA, Pa. (AP) — If the shot-for-shot battle down the stretch between Providence and Villanova was a sneak peek of what's ahead in March, Madison Square Garden may be in for quite a show.

The Big East regular-season champion Friars (24-4, 14-3) and Wildcats could not shake the other over the final furious minutes. Providence’s A.J. Reeves hit a 3-pointer from long distance that brought the Friars within 62-60. Justin Moore hit a 3 for Villanova, and that was answered by one from Providence's Jared Bynum.

With Providence trailing by four, Nate Watson picked up his fourth foul with 2:35 left in the game on a charge call that sent furious coach Ed Cooley on the court to argue.

Justin Minaya buried a 3-pointer with 32 seconds left that pulled Providence within 69-68.

The Wildcats (22-7, 15-4) survived Providence's press and sealed the win from the free-throw line, one more close one pulled out in the rugged conference.

How does another one or two at Madison Square Garden sound?

Bynum scored 19 points for the Friars. Led by five each from Noah Horchler and Reeves, Providence hit 15 3-pointers.

“We made too many mistakes when the game was close and we couldn’t get over the hump,” Cooley said. "The players showed a lot of grit, a lot of resolve.”

The Friars won their first Big East title without beating Villanova. The Wildcats won two weeks ago in Providence, Rhode Island, and entered this one a 10-point favorite, according to FanDuel Sportsbook.

The Big East championship tipped toward Providence after the team had three games canceled because of COVID-19 protocols. The Friars had three straight games wiped out in mid-January at Creighton and Seton Hall and against Connecticut. UConn and Seton Hall were both ranked this season.

So, who knows? The home finale for Villanova could have been for the Big East title.

While another Big East title for Wright would have been nice, the true measuring stick for the program is what lies ahead -- note the two national championship banners won on his watch.

The Friars and Wildcats could meet again next week in New York at the Big East Tournament. Those games will mean more for the NCAA tourney, where earning at least a No. 3 seed in the East Regional could keep the Wildcats in line for Sweet 16 and Elite Eight games in Philadelphia.

The Friars trailed by 14 early but showed their championship mettle on the road to open the second half. They hit six straight 3s to start and Horchler buried his fourth of the game to bring Providence within four. Bynum hit a tough basket in the paint off a turnover and followed with a pull-up jumper that tied the game 48-all. Gillespie and Minaya kept the game tied -- and whet the appetite for a potential rematch next week in New York.

Daniels scored eight straight points and Justin Moore hit a 3 for a 62-57 lead that gave the Wildcats just the breathing room they needed down the stretch.

“I think that's what the Big East is about,” Gillespie said.

Providence: The Friars are locked into the No. 1 seed in the Big East Tournament and play March 10 against the winner of the No. 8-9 game.

“I’m going to approach it for us to continue to improve," Cooley said. “We have to get better handling the ball, rebounding the ball and on-ball defense.”

Villanova: Gillespie suffered a torn ligament in his left knee in last season’s home finale and missed both postseason tournaments. He returned for a fifth season and played in his 147th career game. He’s one shy of the school record set by former teammate Phil Booth.

The Wildcats had only five turnovers to Providence's 16. Daniels had none in 30 minutes and Gillespie had none in 37.

Villanova: Play Saturday at Butler. Villanova has a 15-5 career mark against the Bulldogs.