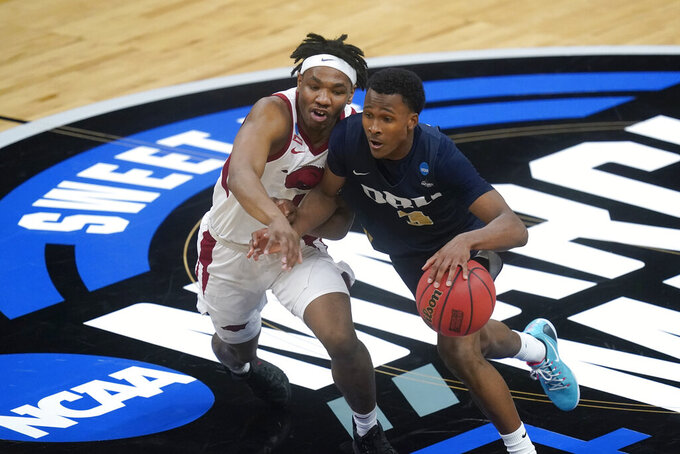 INDIANAPOLIS (AP) — The chants of Arkansas' fans echoed from the concourse long after the players had cleared the floor.

It's not quite “40 Minutes of Hell,” but the Razorbacks are back.

Davonte Davis hit a short jumper with 2.9 seconds left, and Arkansas advanced to the Elite Eight for the first time in 26 years with a 72-70 win over Oral Roberts in the South Region semifinals Saturday night.

“It’s amazing just being able to be in this position right now as an individual and as an Arkansas player," said Davis, who had 16 points.

The Muss Bus grinded its gears through the first half into the second, bad shots and even worse defense putting Arkansas in a 12-point hole against the 15th-seeded Golden Eagles.

It came down to one final shot and Davis made it, sending Arkansas to the Elite Eight for the first time since the Nolan Richardson “40 Minutes of Hell” days.

Next up for the Razorbacks is top-seeded Baylor in what should be a fast-paced South Region final on Monday.

“It’s an incredible feeling to be in an Elite Eight in our second year,” said Musselman, who took over the program in 2019. “I really can’t describe it.”

The let-it-fly Golden Eagles (18-11) let history slip through their grasp.

Within reach of becoming the first No. 15 seed to reach the Elite Eight, Oral Roberts stumbled with a series of turnovers and missed shots.

Max Abmas did his best to put the Golden Eagles in the Elite Eight for the first time in 47 years, scoring 25 points. His 3-pointer at the buzzer bounced off the front of the rim.

“We gave him a pass option, we gave him a dribble option,” Oral Roberts coach Paul Mills said. “He’s super bright and picks up things really quickly and understood and had great court awareness and had great selection on the shot. Unfortunately, it didn’t go in.”

The Golden Eagles had history on their minds. Florida Gulf Coast was the only other No. 15 seed to get this far in 2013 and lost at the regional semifinal round.

Oral Roberts knew it had a chance to top it against the Razorbacks after playing them earlier in the season. Oral Roberts led by 10 at halftime in Fayetteville on Dec. 20 before Arkansas bullied the Golden Eagles in the second half for an 87-76 win.

The Golden Eagles went chest-to-chest with the Razorbacks from the start of their first Sweet 16 game since 1974, contesting shots at the rim and chasing out to the arc to prevent open looks. Arkansas helped them out with some difficult shots, going 1 for 7 from 3 in the first half.

The Razorbacks tried to make it difficult on Abmas, trapping him in most pick-and-roll situations. The nation's leading scorer still found a way to get his points, with 12 in the first half. Carlos Jurgens, who averages 5.7 points per game, took advantage of repeatedly being left open, scoring 11 to help Oral Roberts lead 35-28 at halftime.

The Golden Eagles continued making shots in the second half as the Razorbacks kept taking bad ones, stretching the lead to 46-34.

“We weren't playing hard,” Davis said. “We were playing slow. We were letting them slow us down and that’s not what we needed. We’re a fast team.”

Arkansas had already been in this position once before, needing “24 Minutes of Hell” to outlast another upstart, Colgate, to open the NCAA Tournament.

Just like that game, the Razorbacks snapped out of it, playing better defense and getting to the rim instead of throwing up contested shots. Arkansas chipped the lead down to four midway through and finally caught, then passed, the Golden Eagles into the Elite Eight.

“The job wasn’t just to get to the Sweet 16,” Abmas said. “The job was to get to the national championship and win it. We came up short, but all the stuff we accomplished this season is something we’ll celebrate and remember the rest of our lives.”

Arkansas had 24 offensive rebounds in its regular-season win over Oral Roberts and owned the offensive glass again in the Sweet 16.

The Razorbacks had 18 offensive boards, leading to 18 second-chance points, and had 11 more rebounds overall.

Justin Smith had 10 offensive rebounds in the first game and grabbed 11 more on Saturday.

Jalen Tate kept the Razorbacks in it while they were struggling and had a strong all-around game.

The 6-foot-7 junior used his size to score 22 points. He set up Davis for the winning shot with a drive-and-kick.

“He played well and he was scoring the ball,” Davis said. “We needed that spark and he did it.”