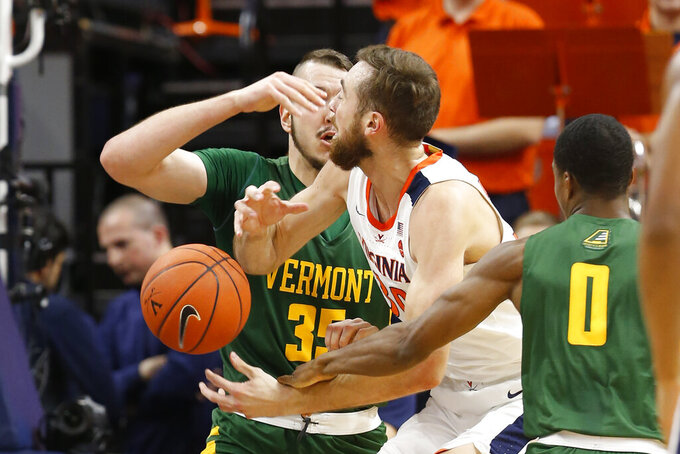 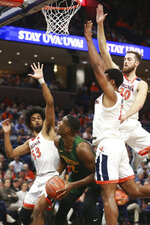 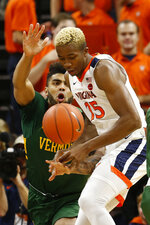 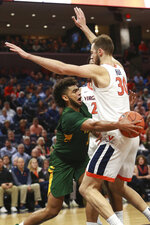 CHARLOTTESVILLE, Va. (AP) — Mamadi Diakite and No. 7 Virginia found themselves in a nail-biter, and with Anthony Lamb putting on an offensive show in the second half, Diakite took it upon himself to try to slow down the Vermont star.

Diakite also scored 19 points of his own and the Cavaliers overcame Lamb’s 30-point night to beat Vermont 61-55 on Tuesday night.

“It reminded me of last year when we played against Purdue — Carsen Edwards hitting again and again and again,” Diakite said, recalling Virginia’s Elite Eight overtime victory in the NCAA Tournament when Edwards scored 42 points.

“One of those days when everything falls in. At the end, I wanted to take the challenge and I responded to it I thought,” Diakite said.

Lamb scored 25 points after halftime and hit seven 3-pointers in all, but didn’t score for the last 5 ½ minutes.

The Cavaliers, meantime, had to overcome their own offensive struggles with their trademark — defense.

The Cavaliers (4-0) trailed before Diakite’s basket gave them a 50-49 lead with 5:12 left and sparked a 9-0 run. Jay Huff scored twice in the spurt and Braxton Key hit a 3-pointer as Virginia held the Catamounts scoreless, and forced four turnovers, in a nearly four-minute span.

Lamb at one point scored 17 points in a row for the Catamounts (4-1) and nearly matched the point total of the Cavaliers’ first two opponents, who each managed just 34 points. Stef Smith added 11 points, but Virginia turned Vermont’s 13 turnovers into 20 points.

“We wanted to keep them off the offensive glass. We did that. Wanted to make 3s. We did that, but just came up a little short,” Vermont coach John Becker said. “Just had to play guys too many minutes. We were a guard down and I thought that caught up with us.”

Kihei Clark scored 15 points and Key had 14 for Virginia.

Virginia led 24-18 at halftime, but Vermont used a 10-2 run to start the half to take its first lead since the early going. Lamb had seven points in the run, including the last five, and tacked on his team’s next 12 points with four 3-pointers as the score was tied five times.

Vermont: The Catamounts hang their hat on defense, too, and came into the game with a 107-9 record since the 2011-12 season when holding their opponents to 60 points or fewer.

Virginia: The Cavaliers’ defensive excellence has been essential early in the season as they still are struggling to find an offensive rhythm. Highly regarded freshman guard Casey Morsell came into the game having made just 2 of 21 field goal attempts and was 1 for 6. Virginia has made 21 3-pointers in its first four games and allowed 31, including 12 by the Catamounts in 34 attempts.

Clark, a sophomore not known for his shooting, made several key baskets, especially when both teams finally found some offensive rhythm down the stretch and were trading baskets. He hit a pair of 3-pointers and scored on a pair of drives to the basket.

“Just kind of taking what the defense gave me. I think on that 3 I hit in the second half, (the defender) went under, so I shot it,” he said.

The Cavaliers face Massachusetts on Saturday at Mohegan Sun Arena in Connecticut.