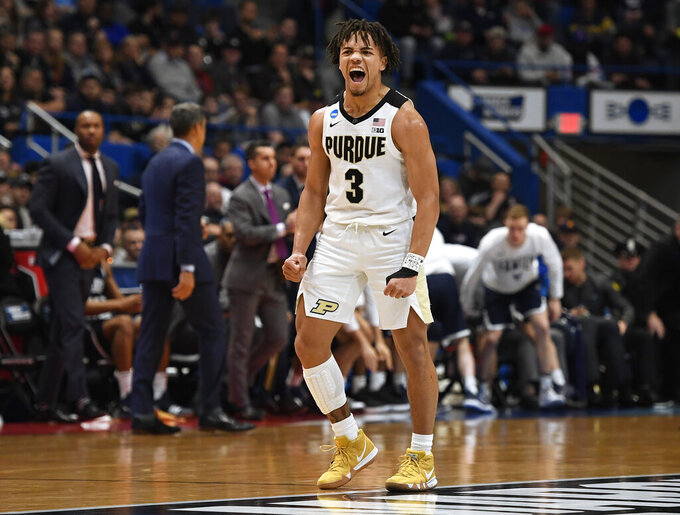 Purdue's Carsen Edwards (3) reacts during the first half of a second-round men's college basketball game against Villanova in the NCAA tournament, Saturday, March 23, 2019, in Hartford, Conn. (AP Photo/Jessica Hill) 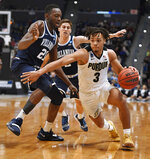 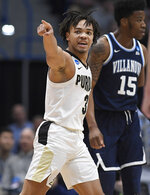 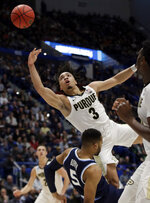 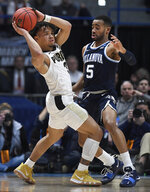 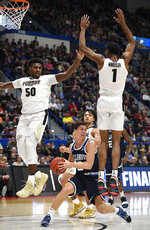 HARTFORD, Conn. (AP) — Purdue's Carsen Edwards says he was getting tired of answering questions about his shooting slump.

The Boilermakers' junior star had all the answers Saturday night. He scored a career-high 42 points as Purdue knocked reigning national champion Villanova out of the NCAA Tournament in an 87-61 rout.

Matt Haarms added 18 points and nine rebounds for the third-seeded Boilermakers (25-9), who advanced to their third straight Sweet 16. Ryan Cline added 12 points, all on 3-pointers.

Eric Paschall had 19 for Villanova (26-10), which saw its quest for a third national title in the last four seasons end during the tournament's first weekend. Fellow senior Phil Booth scored 15 points, putting him over 1,500 for his career.

Edwards has battled a sore back and coming into the tournament had hit just 32 percent from the floor in his previous 11 games.

Against Old Dominion in the first round he was not much better, scoring 26 points but on 7 for 23 from the floor and 4 for 12 from behind the arc.

He found the bottom of the net early and often against 'Nova, making 12 of his 21 shots and nine 3-pointers on 16 attempts.

"I wouldn't say I knew I had a career night until the game was over," he said. "I was just so focused on trying to get the win, especially in games like this where you value every possession."

It was the worst tournament loss in Villanova's storied NCAA Tournament history and the largest blowout of a defending champion in nearly three decades, dating back to Loyola-Marymount's 149-115 dismantling of Michigan in 1990.

Purdue jumped out early, building a 13-point lead thanks to Edwards' outside shooting and Haarms' work down low.

The 7-foot-3 Dutchman towered over the shorter Wildcats, who didn't start anyone over 6-8.

Purdue had nine 3-point baskets in the first half and a dunk by Haarms put the Boilermakers up 43-24 at intermission.

Another dunk from the Dutchman extended the lead to 35 in the second half. Villanova chipped away but the sixth seeded Big East champions did not have weapons to make it a game.

Purdue: The win gives the Boilermakers 25 victories for the fourth straight season. Purdue had only done that once before, between 2008 and 2011.

Edwards' nine 3-pointers was a record for a game in Hartford's XL Center. The previous mark of eight was held by the most prolific 3-point shooter in NBA history, Ray Allen, when he played for UConn.

"That's crazy," Edwards said. "I'm blessed to be able to shoot the ball like that and to make 3s like that."

Purdue coach Matt Painter said as proud as he is of the consistency it takes to make it to the regional semifinals three years in a row, he's not looking at that as a great accomplishment.

"You know you're greedy as a coach," he said. "You look at it like you didn't advance further; you should have played better in conference play. We're excited about going to the Sweet 16, but we want to do better. We want to do better for ourselves and our fans."

The Boilermakers will face the winner of Sunday's game between Iowa and Tennessee.