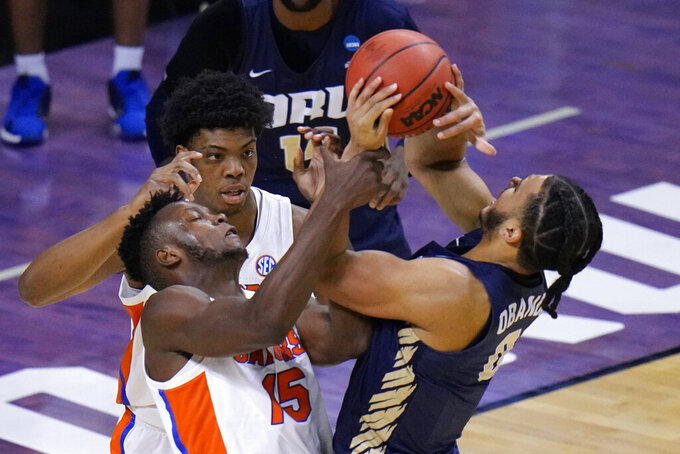 Florida forward Osayi Osifo (15) tries to steal the ball from Oral Roberts forward Kevin Obanor, right, during the first half of a college basketball game in the second round of the NCAA tournament at Indiana Farmers Coliseum, Sunday, March 21, 2021 in Indianapolis. (AP Photo/AJ Mast)

GAINESVILLE, Fla. (AP) — It appears Florida coach Mike White will be an active shopper in the burgeoning transfer portal.

The 6-foot-7 Osifo has two years of college eligibility remaining and is “looking for a new home to finish my college story,” he wrote on his Twitter page.

Osifo grew up South Africa playing cricket and rugby and running track. He picked up basketball late and came to the United States to attend a prep school in McKinney, Texas. He landed at Eastern Florida State College, where he spent two years before transferring the Florida.

Florida is still waiting to see what happens with forward Keyontae Johnson, who was hospitalized after collapsing during a game in early December and then ruled out for the season. The cause of his collapse has yet to be revealed.