Fortunate Friars living in moment with top seed Kansas next 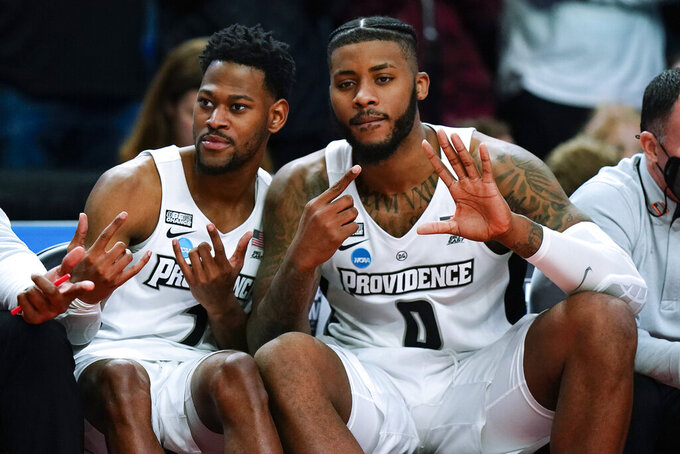 Providence guard Al Durham, left, and center Nate Watson (0) react from the bench late in the second half of the team's college basketball game against Richmond in the second round of the NCAA men's tournament Saturday, March 19, 2022, in Buffalo, N.Y. (AP Photo/Frank Franklin II)

It helped create a narrative about the Friars: that despite earning 25 victories and winning a Big East regular-season championship, they had simply been more lucky than good because of an 11-2 record in games decided by five points or less.

“The narrative on doubt and luck and this and that, yeah, it plays on you,” Cooley said. “The players will come in the locker room and talk about it, and I tongue-in-cheek it a little bit, but, you know, you got some older guys out there just willing to try to compete for respect. I don’t have to be liked, but I’ll be damned if you’re not going to respect me.”

The Friars (27-5) used that as fuel as they held off South Dakota State and then blew past Richmond to advance to their first Sweet 16 since 1997.

Yet, after limiting its first two opponents to just 54 points per game — the second-fewest allowed of the remaining teams — Providence again finds itself as an underdog as it prepares to meet top seed Kansas (30-6) on Friday with a spot in the Elite Eight on the line.

At this point, the tag of “Fortunate Friars” is a moniker Cooley and his veteran team don’t mind claiming.

“The DNA in that locker room is trust. It’s toughness. It’s playing with an edge, playing with a chip. We’re still the team that was picked seventh (in the Big East). We’re still the team that everybody talked about, well this team didn’t have this main guy, this team didn’t have that one,” Cooley said. “We never talked about what we don’t have. We appreciate what we do have. We know who we are and you have to get lucky to advance in a lot of these games. It’s tournament play. And what I’m proud of our guys is we saved our best for the moment.”

Providence will arrive in Chicago as one of just two teams from the Big East remaining in the Big Dance, along with Villanova.

The Big 12 is tied with the ACC with three teams each in the final 16, with the Jayhawks joined by Texas Tech and Iowa State.

The Red Raiders are the lone common opponent between Providence and Kansas. The Friars beat them 72-68 in Providence in December. The Jayhawks lost their first matchup at Texas Tech in January, before beating the Red Raiders in Kansas and again in the Big 12 championship game.

It’s one of the reasons Kansas coach Bill Self is expecting his team to have its hands full. He’s concerned about a veteran Friars roster that has five players who have attempted at least 100 3-pointers, with three shooting 38% or better.

“That makes you concerned that they’re all capable and willing shooters, and if two of those five get hot, that’s eight 3s right there,” Self said. “So you’ve got to do a really good job defending the arc.”

Cooley said he feels like the competitiveness in the Big East has been overlooked all season and that it has set them up for this moment.

Horchler, who is coming off a 16-point, 14-rebound performance in Providence’s win over Richmond, said that while he and his teammates respect the “blue blood” Jayhawks, they are embracing the opportunity they have this week to get Providence back to somewhere it hasn’t been in 25 years.

“It’s just an exciting time in our lives,” he said. “This is what we’ve dreamed about since we were kids. We’re just living in the moment.”

Cooley and the Friars are also done trying to block out what outsiders are saying about them. They're content to live with being judged based on their performance.

“I listen to that ‘One Shining Moment’ song every single day. It’s real, there’s goosebumps in me saying it as I speak," he said. “They wanted to be a tournament team. And the narrative in our locker room has been leave your mark, leave your legacy. That’s something this group is doing and hopefully the mark is not cemented yet. Hopefully there’s more to play.”