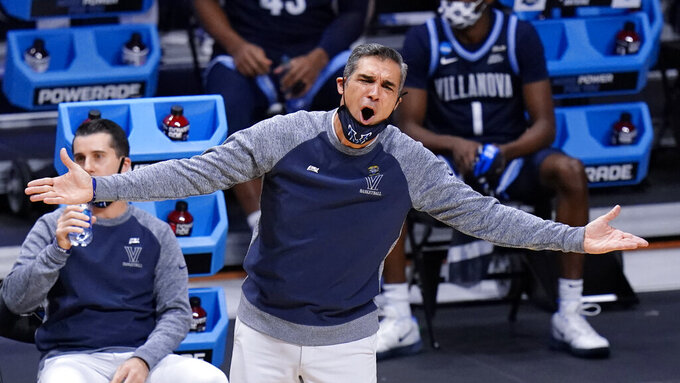 Villanova head coach Jay Wright argues a call against Baylor in the first half of a Sweet 16 game in the NCAA men's college basketball tournament at Hinkle Fieldhouse in Indianapolis, Saturday, March 27, 2021.(AP Photo/AJ Mast)

There was a “college basketball team” this season with a collection of players who figure to go high in the upcoming NBA draft.

It wasn’t Gonzaga or Baylor.

In fact, this team was nowhere near the Indianapolis bubble during the NCAA Tournament, but rather, near Orlando, Florida, for the NBA G League playoffs last month.

The Ignite, a development squad affiliated with the G League featuring elite NBA draft-eligible players, had a roster full of teenagers who all could’ve been standouts at the tournament — had they chosen the college route. Jalen Green, Jonathan Kuminga, Daishen Nix and Isaiah Todd were all coveted five-star recruits.

Instead, they chose a different sort of basketball education — an option that may slowly change the nature of the college game itself. Rather than being a one-and-done on some college team, more 18- and 19-year-olds may choose the G League’s development team or head overseas (see: LaMelo Ball).

Coming soon: A new pro league called Overtime Elite, which markets itself to high schoolers and guarantees an academic education along with a guaranteed six-figure salary.

Now that could be a real game-changer on the college landscape.

“The NCAA has had a stranglehold basically on the system in the way it works, from as far back as you can imagine,” said Ignite coach Brian Shaw, a three-time world champion as a player with the Los Angeles Lakers. “So now it gives them some competition. You’re not bound by all these rules and regulations that are advantageous for the NCAA to make all the money.

“These kids get an opportunity to kind of cash in on their market value, what they’re bringing to the table while developing.”

To be eligible for the draft, a prospect must either be 19 or one year out of college. That's led to plenty of one-and-done players over the years. Kentucky coach John Calipari is renown for courting one-and-done talent. But with more options available to blue-chip players, there could be fewer to choose from — and more importance placed on continuity.

Villanova coach Jay Wright tries to be up front with recruits in assessing their career paths — even if it might mean steering them toward the G League.

“When they feel they have choices and not being forced into situations, they’re better when they make their choice,” Wright explained. “They’re far more invested.”

Look on the NBA mock draft sites and no program — with the possible exception of Gonzaga — has as many names mentioned as Shaw’s Ignite squad. Green and Kuminga are projected as top-five picks, while Nix and Todd figure to go a little later.

Todd was all prepared to go to Michigan before a change of heart. This is how much the Wolverines meant to him: He was pained when they were eliminated from the NCAA Tournament in the Elite Eight. He even sent coach Juwan Howard a consolatory text.

But the Ignite was just too enticing — a chance to jumpstart his pro education.

“Growing up, I always thought I had to go to college to go to the NBA,” Todd said. “Times are changing. There are different options and there are different pathways to take your dreams into action. Kids are starting to realize that.”

This could be the wave of the future — and make things even more difficult on recruiting. UCLA coach Mick Cronin recently spoke out about losing Nix to the Ignite.

“There were things that were said in the process, man, just weren’t right,” Cronin told Jay Williams on ESPN Radio’s Keyshawn, JWill & Zubin show. “I know what was said to him. I know things that were told to him that convinced him and scared him about UCLA not playing or college basketball not happening."

The landscape for rising players also includes heading overseas like Ball, who played in Lithuania and Australia before being picked No. 3 overall by Charlotte in the most recent draft. Or even working out/training, like Portland guard Anfernee Simons at IMG Academy as part of a gap year before the Trail Blazers drafted him in 2018.

A new entity in the game could drastically change the dynamics — Overtime Elite, the league that was launched through the sports media company Overtime. The league has big plans to break into the competitive basketball market by recruiting 16-to-18-year-old standouts. The selling points include world-class coaching, advanced sports science and performance technologies, state-of-the-art facilities and personalized academic programs.

There's also this: Lucrative paychecks, with a minimum salary of at least $100,000 per year, along with signing bonuses and even shares in the company. The league also offers health and disability insurance, in addition to college tuition — should players want to go to school. Not to play, of course, because their college eligibility would be forfeited.

Starting around September, the league plans on having 30 elite players all living and playing in a city yet to be named.

“We want to make sure that we are an option for this elite of the elite to pursue their dreams,” said Aaron Ryan, the commissioner and president of OTE who previously spent 22 years with the NBA. “Everybody’s coming to the same conclusion — providing options for these young people is the right path forward."

Shaw took his young group under his wing as they trained in Walnut Creek, California. The team went 8-7 in the G League season inside the bubble near Orlando before being eliminated in the playoffs. Green (17.9 points), Kuminga (15.8) and Todd (12.3) led the way in scoring while being the mentored by veteran teammates like Jarrett Jack and Amir Johnson.

“I feel like a pioneer,” Todd said of his Ignite decision. “I feel like I achieved part of what I want to do in my bigger goal in life, which is to create some type of change. Not only for basketball players but people in general — to seek their own truth and to defy the status quo for the greater good.”