Hachimura, Gonzaga use strong 2nd half to beat USD 79-67 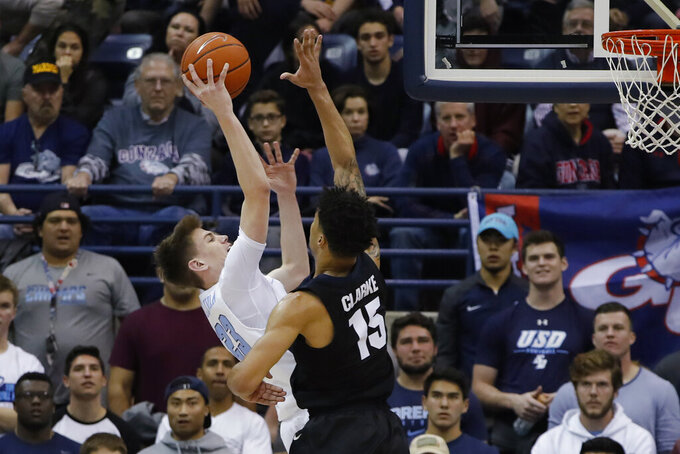 Once they got warmed up, there was no doubt they're one of the nation's best teams.

Zach Norvell Jr. added 18 points, Josh Perkins 15 and Brandon Clarke 14 for the Bulldogs (25-2, 12-0 West Coast). The nation's highest scoring team, Gonzaga had only 30 points in the first half, but then scored 31 points in the first 9:59 of the second half to take control.

"We came back with a good energy from the beginning of the second half and we definitely had a good defense," Hachimura said.

Coach Mark Few said the difference for Hachimura was that "he started playing harder and being more assertive and not settling. He's really, really good when he does that. When he goes back to settling and not playing as hard, he's not very good. That's kind of true for all players."

Gonzaga took the lead for good during an 8-0 run early in the second half, getting a jumper from Perkins, a reverse layup by Hachimura and two baskets by Clarke for a 45-37 lead that forced Toreros coach Sam Scholl to call a timeout.

The Zags, who have won 10 straight against the Toreros, continued to pour it on behind Hachimura and Brandon Clarke. Their biggest lead was 15 points with 8:29 to play.

"We were getting stops," Few said. "If you're taking the ball out of the net, you can't run. You've got to get stops. When we get stops, this team runs as good as any we've ever had. That's a big key."

"We knew our defense can get on pace better than offense," Norvell said.

"We just had a different mindset starting the second half," he added. "We were more in attack mode. They were more aggressive in the first half so in the second half we wanted to bring the fight to them and I think we did that pretty well."

Gonzaga was coming off a 73-60 win at Loyola Marymount in which it trailed midway through the second half before closing with a 20-6 run.

San Diego managed to tie it at 30 at halftime even though Pineiro, their leading scorer, had only two points and committed three fouls. Carter had 12 points in the first half but only two in the second.

"San Diego did a good job of disrupting our rhythm. They're a tough out for us," Few said. "They're one of the hardest teams for us to play in the league. Sam's done a great job. They're extremely difficult for us to guard. We spend more time breaking their stuff down than anybody."

Scholl was pleased with his team's resilience in the first half, which it couldn't sustain.

"But unfortunately, a team that's going to have every opportunity to win a national championship came out and showed all the reasons why. They got us on our heels and came with a full-fledged attack that our defensive identity wasn't ready for," Scholl said.

Gonzaga: Twenty-five representatives from 19 NBA teams were credentialed for the game. The Zags are 44-4 against USD under Few.

San Diego: The Toreros have never beaten a top-10 team.