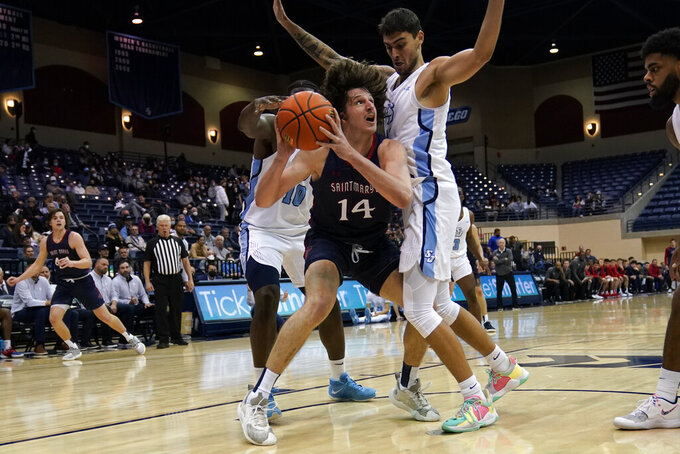 “This is a really good win. We needed to get it," Saint Mary's coach Randy Bennett said. “It was a key game. Our guys were really dialed in. We’ll take it.”

Jase Townsend scored 13 for the Toreros, who have lost five of six games.

San Diego was playing without 6-foot-10 Terrell Brown-Soares for the second straight game, and it showed as the bigger, stronger Gaels dominated this one from early in the first half. They held the Toreros without a field goal for seven minutes while going on a 15-2 run to take control. Bowen had seven points during that stretch, including a 3-pointer.

San Diego missed eight straight shots until Townsend made a bank shot with 11:38 to go before halftime to pull the Toreros to 16-9. The Gaels scored the next six points.

Enjoying a size mismatch along the front line, the Gaels dominated inside on both ends of the floor to take a 37-20 halftime lead. They got their final points of the first half on a 3-pointer by the 6-foot-8 Bowen.

“We weren’t even thinking about Gonzaga (the next opponent) tonight. It was all about San Diego. Our guys were ready to play.”

“The guys battled,” San Diego coach Sam Scholl said. “We had a couple stretches where it wasn't going our way and we didn't compete great and I think that's probably the difference in the game.”

Saint Mary's: The Gaels now turn their attention to their regular-season finale against No. 1 Gonzaga at home on Saturday night. The Gaels lost 74-58 to Gonzaga in Spokane on Feb. 12.

San Diego: The Toreros didn't come close to matching the Gaels' size and strength and couldn't get anything going inside on offense.