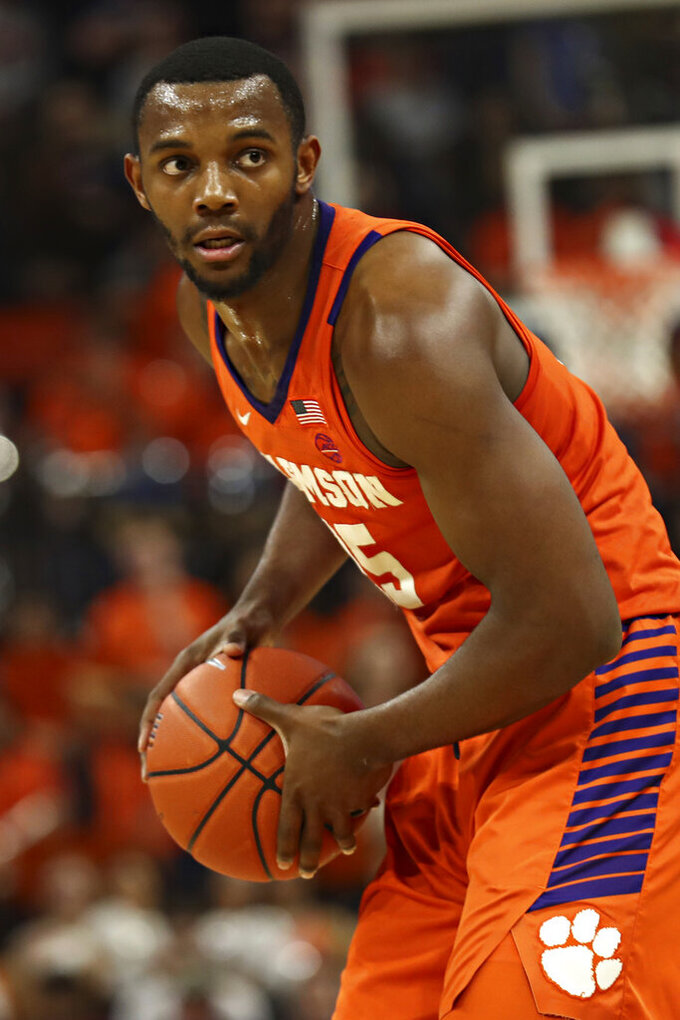 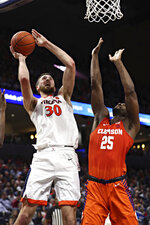 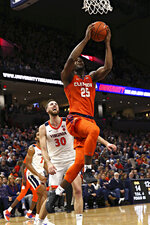 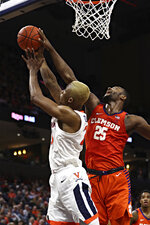 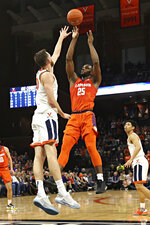 CHARLOTTESVILLE, Va. (AP) — Braxton Key always does plenty of the little things for Virginia — like setting screens, rebounding and playing stout defense — that help the Cavaliers have success.

He did the big things, too, Wednesday night, hitting two critical 3-pointers in the final 5 minutes as the Cavaliers beat Clemson for the 10th consecutive time, 51-44.

"I just told Kihei (Clark) `Find me and I'll just make a play,' and I made a couple of plays for the team," Key said. His first 3-pointer came shortly after the Cavaliers went nearly 5 1/2 minutes without a point, seeing an 11-point lead whittled to 36-34. The next made it 45-39 with 51 seconds remaining.

“Just trying to do whatever I can do to help the team win,” the second-year transfer said. "The shot felt great tonight so I was just going with that.”

With Virginia flailing on offense, Key saved the day. After having surgery on his left wrist earlier in the season, he's been playing with progressively smaller casts on the hand as the injury heals, and said his comfort level is allowing more confidence. Making the big shots only enhanced that feeling, he said.

It came at just the right time for the Cavaliers, who have now won three straight after losing four times in a five-game span.

“Sometimes it gets to that point and you just need someone to jump up and make a shot or make a big play and Braxton did that twice,” Virginia coach Tony Bennett said.

Aamir Simms scored 16 points for the Tigers (11-11, 5-7). Clemson twice got within one possession in the closing minutes, bringing a hush over John Paul Jones Arena, but Key answered each time. He was 4 for 6 from beyond the arc in the game after having made just 8 of 45 attempts in his first 17 games.

“I think he's just an older player that saw that his team needed him to play and played well. He took it upon himself to make big shots and that's what good older players do,” Tigers coach Brad Brownell said..

"We had some chances, had some looks, and we've struggled to make those big-time 3s on the road that you need to win games like this," he said.

Key's first big 3 came ended a 12-3 run for the Tigers that pulled them within 36-34 with 5 minutes to go. After they again closed within 42-39, Key made another with 1:28 to go and followed by making both ends of a one-and-one free throw opportunity to push the advantage to eight with 51 seconds left.

The Cavaliers, who lead the nation in scoring defense — allowing just 50.7 points per game — won for the eighth time this season when scoring 60 points or fewer and held their 11th opponent below 50.

Clemson: The Tigers have been somewhat like Virginia in their offensive difficulties. In games where they fail to score 70 points, they were 2-10 coming into the game against the nation's stingiest defense. In losses, they've failed to reach 60 points six times, with lows of 45 (Yale) and 44 twice (Wake Forest, Virginia). They shot 32.7% (17 of 52) and were 6 of 28 (21.4%) on 3-pointers.

Virginia: The Cavaliers' very deliberate approach on offense at times seems to have the same effect on them as a baseball pitcher who works very slowly has on his defense, causing concentration issues or sluggishness. They often seem to be passing the ball around the perimeter more looking for someone willing to take a shot than for someone open to take a shot.

Virginia travels to No. 5 Louisville for a Saturday afternoon contest.