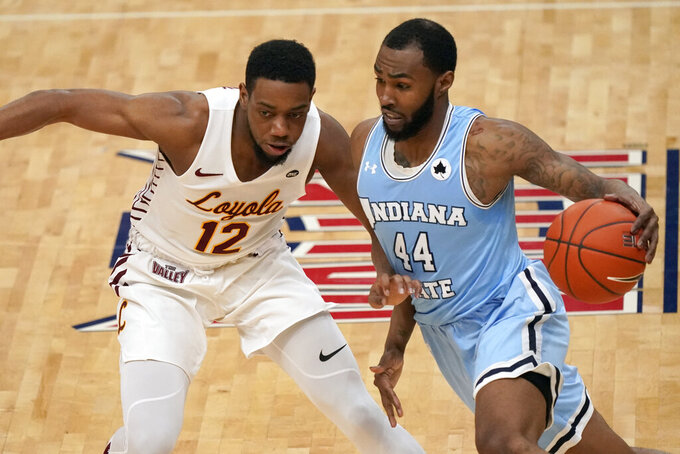 Indiana State's Randy Miller Jr. (44) heads to the basket past Loyola of Chicago's Marquise Kennedy (12) during the first half of an NCAA college basketball game in the semifinal round of the Missouri Valley Conference men's tournament Saturday, March 6, 2021, in St. Louis. (AP Photo/Jeff Roberson)

“The five starters have really kind of taken it upon ourselves to set the tone in games,” Krutwig said. “It's not just offensively. It's mostly on defense. When it comes down to it we were firing on all cylinders, making the right reads.”

Key was averaging 17.5 points per game coming into the day.

“We just have a constant respect for him," Ramblers forward Aher Ugusk said. “Guarding him with being physical and just keying on him has just been a goal of ours.”

The Sycamores were one of two teams to beat top-seeded Loyola in conference play with a 76-71 win at home on Jan. 10. But they fell behind early in this one and never caught up.

“They just came out and steamrolled us with making shots and put us behind the eight ball early.” Sycamores coach Greg Lansing said.

Braden Norris set the tone by hitting three 3-pointers in the first 10 minutes. The Ramblers led 42-28 at halftime.

“It felt like we were loose,” Ramblers coach Porter Moser said. “We know we can shoot and the guys have just been really loose shooting it.”

It was the 96th win at Loyola for Krutwig and Williamson, who continue to build on their record as the winningest four-year players in school history. Both played on the 2018 team that went to the Final Four.

“I think it just kind of comes full circle,” Krutwig said. “My freshman year we were able to win it and I think there's a lot of similarities with the mindset that we have.”

Indiana State: Lansing has 181 wins with the Sycamores, leaving him one behind Duane Klueh's school record.

Loyola Chicago: The Ramblers set the tone again with suffocating defense. Loyola has not allowed more than 54 points in each of its past six wins in the conference tournament.

Loyola Chicago faces the winner of the Missouri State-Drake semifinal on Sunday.