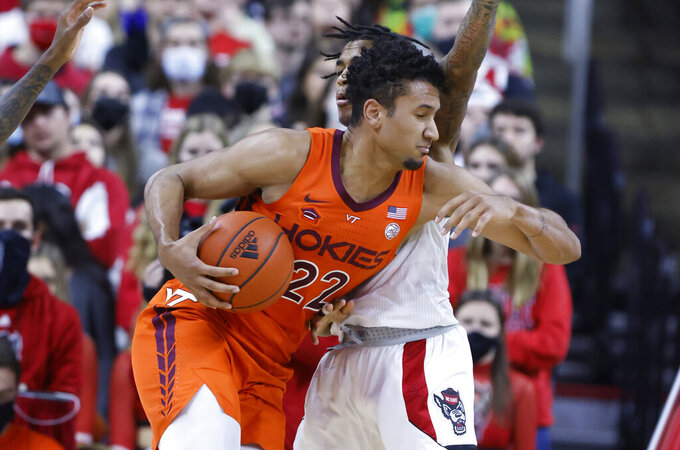 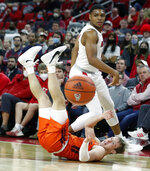 NC State trailed 35-21 at halftime, but the Wolfpack battled back to close within 55-53 on a 3-pointer by Jericole Hellems with 5:33 remaining.

Mutts answered with a layup and Storm Murphy followed with a 3-pointer to push the Hokies' lead to 60-53 with 2:16 left. Derion Seabron hit a jumper off a missed free throw, stole the ball and dunked and stole the ball again and made a layup as the Wolfpack used five straight turnovers by Hokies point guard Nahiem Alleyne to get within a point with 21 seconds to go.

Pedulla subbed in for Alleyne, was fouled by Terquavion Smith and made both free throws. Smith missed a 3 at the buzzer for NC State.

Aluma finished with 10 points and 11 rebounds for Virginia Tech (10-7, 2-4 Atlantic Coast Conference). Alleyne scored nine on 3-of-14 shooting with six rebounds. All five of his turnovers came in a span of 55 seconds.

Hellums scored 15 to pace NC State (9-10, 2-6). Smith scored 14, but he made just 4 of 13 from distance. Seabron finished with 13 points, five rebounds, four assists and five of the Wolfpack's nine turnovers. Casey Morsell came off the bench to score 11, nailing 3 of 4 from beyond the arc.

The Wolfpack announced before the game that freshman forward Ernest Ross will need surgery and miss the rest of the season after fracturing his right ankle in practice.

Virginia Tech stays on the road and will play Boston College on Saturday. NC State will entertain Virginia on Saturday.